Curiosity scoops martian soil in yet another milestone [VIDEO] 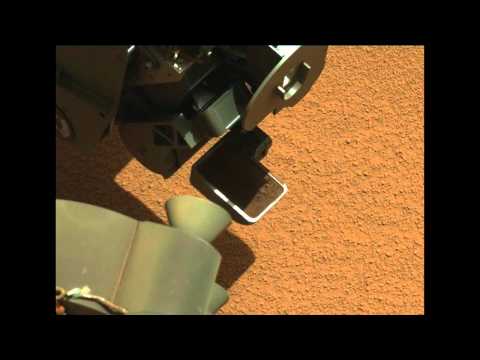 It may look like an ordinary cup of sand, but for NASA scientists this is a milestone almost as important as the rover’s landing on Mars itself. Yesterday, Curiosity finally scooped a patch of martian soil and shook it for refinement, a moment which was being observed with anxiety from back on Earth.

“There was a lot of clapping yesterday, probably the most since landing, when we saw a nice full pile of soil in the scoop,” Vasavada said. “It looks and acts a lot like baking flour. And just like any baker, we shook the scoop to make sure we had a nice level spoonful. This also mixes up the soil for us, to ensure a good analysis,” said deputy project scientist Ashwin Vasavada.

The rover picked a spot in Mars’ Gale Crater called Rocknest to commence martian soil sample retrieval. With a robotic scoop, the robot gathered fine Martian sand and started shacking it, such that the vibrations may spit out pebbles and remove overfill. After it’s finished, the sand is then discarded, only to be retrieved yet again and vibrated – a process which takes 3 runs in total. After the sand is deemed fine enough, it will soon be emptied in Curiosity’s specialized analysis laboratory which lies in the rover’s interior. Curiosity’s main missions is that of looking for signs of life, so making sure no Earth contaminants are presented in the martian sand sample and taking every measure of precaution, no matter how scrutinous, is essential to the safe assessment of the missions.

Still, scientists aren’t expecting to find anything other than what they already know will be in the sample – although surprised are always welcome. Among all the hard work and stress, the scientists supervising Curiosity also have time and spirit for a laugh or two. So excited to dig in! One scoop of regolith ripple, coming right up!” reads  @MarsCuriosity twitter account.