A lot of worry was spurred when a malfunction at Curiosity’s drilling mechanism jeopardized the entire mission, but now, everything seems to be working out just fine; the rover conducted its first test drill without any negative events. However, the real work is just beginning, as the first drilling-sampling operation took place.

This is the first time any robot has drilled into a rock to collect a sample on Mars. Curiosity drilled into a flat, veiny rock on Mars and collect a sample from its interior. The hole is about 1.6 centimeters wide and 6.4 cm deep, in a fine patch of sedimentary rocks. The rock is believed to be a witness of times when Mars had significant amounts of water on its surface. In pursuit of the evidence, Curiosity will now analyze the extracted powder.

“The most advanced planetary robot ever designed is now a fully operating analytical laboratory on Mars,” said John Grunsfeld, NASA associate administrator for the agency’s Science Mission Directorate. “This is the biggest milestone accomplishment for the Curiosity team since the sky-crane landing last August, another proud day for America.”

But the process is delicate and takes a lot of time; ground controllers will spend the next several days commanding the robotic arm to carry out a series of steps to process the samplel, the final purpose being to carry the samples onto the robot and analyze them.

“We commanded the first full-depth drilling, and we believe we have collected sufficient material from the rock to meet our objectives of hardware cleaning and sample drop-off,” said Avi Okon, drill cognizant engineer at NASA’s Jet Propulsion Laboratory, Pasadena, Calif.

Another problem is possible contamination. Before analyzing the rock powder, Curiosity will compare it to any traces of material stuck in its hardware since when it was on Earth, despite thorough cleaning before the launch.

“We’ll take the powder we acquired and swish it around to scrub the internal surfaces of the drill bit assembly,” said JPL’s Scott McCloskey, drill systems engineer. “Then we’ll use the arm to transfer the powder out of the drill into the scoop, which will be our first chance to see the acquired sample. Building a tool to interact forcefully with unpredictable rocks on Mars required an ambitious development and testing program,” said JPL’s Louise Jandura, chief engineer for Curiosity’s sample system. “To get to the point of making this hole in a rock on Mars, we made eight drills and bored more than 1,200 holes in 20 types of rock on Earth.” 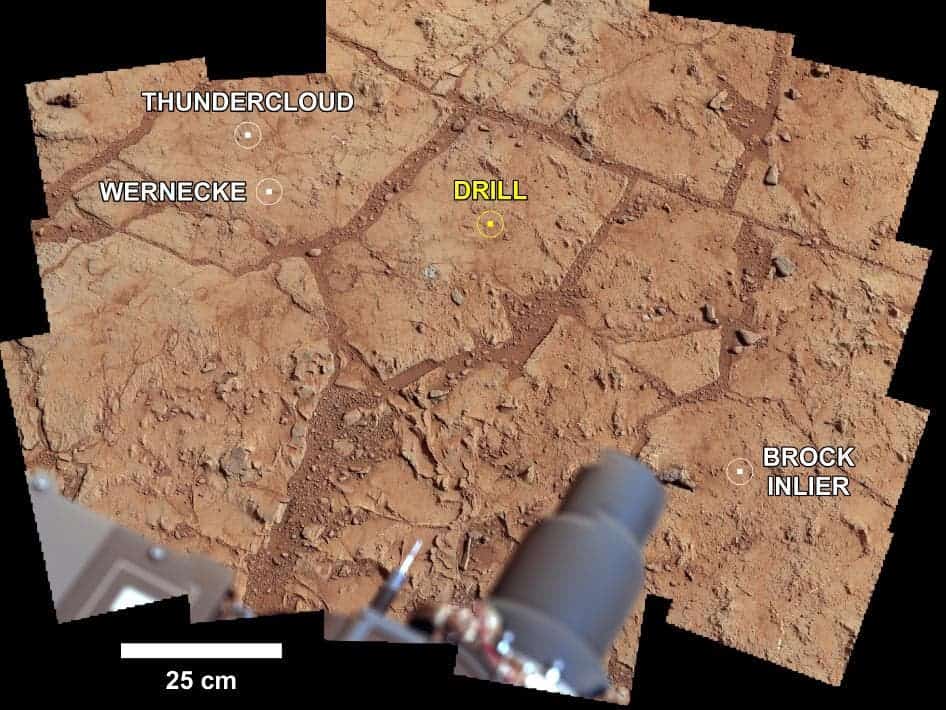 Basically, inside the handling device, the powder will be vibrated once or twice over a sieve that only allows particle smaller than 150 microns across – a micron is 0.001 millimeters. These selected small rocks will fall through ports on the rover deck into the Chemistry and Mineralogy (CheMin) instrument and the Sample Analysis at Mars (SAM) instrument. These two will then finally begin the much awaited analysis which will potentially show, beyond the shadow of a doubt, that Mars had water on its surface.