A new Dinosaur species and the Crocodilian Connection

Paleontologists spend a majority of their working years studying fossils with only one objective – to unearth a discovery that will further benefit mankind’s understanding of dinosaurs. One such recent discovery established the presence of a hitherto unknown herbivore dinosaur. 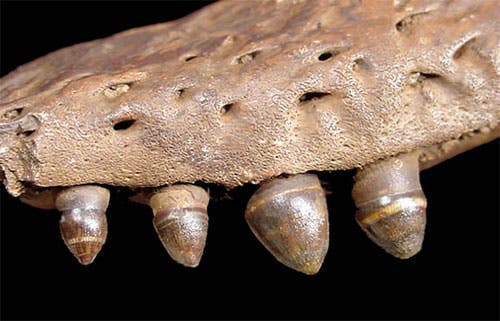 This discovery was made possible thanks to efforts by Clint Boyd of the South Dakota School of Mines and Technology. Research revealed that these fossils belonged to yet-to-be-named baby dinosaurs that were between 3 and 6 feet long. The discovery was unearthed in an area known as the Grand Staircase Escalante-National Monument in southern Utah. The fossils belong to the late Cretaceous period, which was the last age of the dinosaurs.

What made this find more interesting for the researchers was the presence of a Crocodilian tooth embedded in the femur fossil. The tooth has great significance because history has always depicted dinosaurs as the dominant species. This find is an addition to a series of other evidence that show Crocodilians as vicious predators of small to big-sized dinosaurs.

Crocodilians are neither alligators nor crocodiles but ancestors of both. National Geographic had aired a show titled “When Crocs Ate Dinosaurs” that gave a complete picture on how Crocodilians came into prominence. Around 65 million years ago, dinosaurs began to suffer due to changing climactic conditions. This is when Crocodilians took over and began to thrive – they have survived well with close to 23 modern species in the present day.

Fossils of Crocodilians date back to the late Triassic period, around 200 million years ago. Several Crocodilians have been unearthed in their complete form – they give a clearer picture on the physical attributes of these beasts. A lot has been written about the Deinosuchus, which was the size of a T-rex and bigger than most carnivorous dinosaurs.

They were immensely huge, measured up to 50 feet (15 meters) and weighed around 10 tons. Keeping aside their large size, the Deinosuchus was similar to modern day crocodiles and alligators in all respects. They had a broad snout and limbs similar to their contemporary siblings. No wonder earlier Crocodilians scored heavily in combat against dinosaurs!

Let us get back to the new dinosaur featured in this article. Soon researchers will unravel a new name for this species. With
the naming, we will be able to unravel more in the big jigsaw that represents the world of dinosaurs.

Author the author – Susan Smith is a writer from Henderson, Nevada. She also serves as the Online Marketing & Sales Manager at Promo Direct, a firm offering quality business gifts to a diverse range of businesses across America. Susan loves interacting with business owners and providing them with quality promotional products for their branding needs.