by Tibi Puiu
in Astrophysics, Remote sensing, Space
Reading Time: 2 mins read
A A
Share on FacebookShare on TwitterSubmit to Reddit 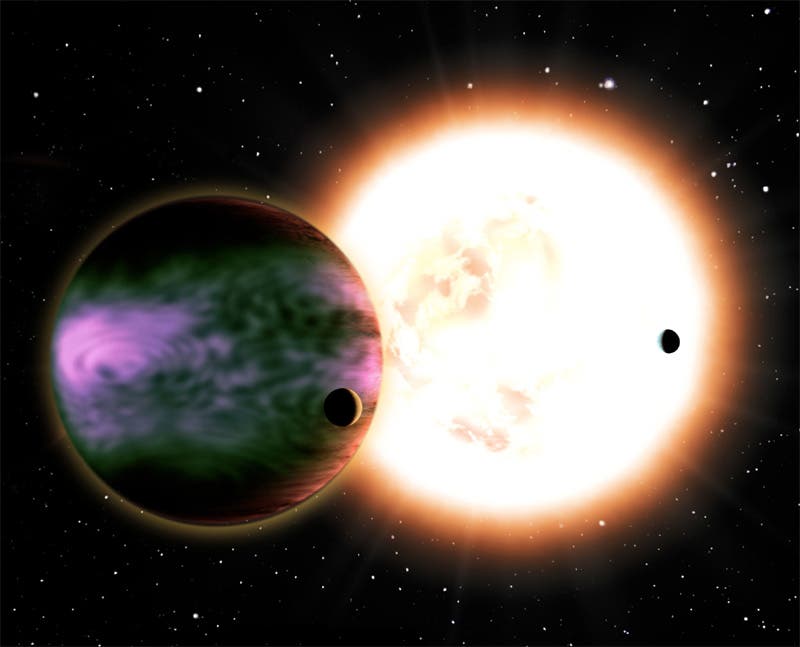 There are few more dazzling sights in the world than that of the great Norther Lights, and in a exercise of brilliant imagination scientists have depicted how an aurorae would look like on huge hot planets.

Scientists ran computer models of so-called “hot-Jupiters” placed in close proximity to a sun (a few millions miles away, instead of the safe-base 90 million miles distance Earth has behind our sun), which, coupled with a huge magnetic field due to its mass, rendered an incredible aurorae 100 to 1000 times more luminescent than the ones found on Earth.

“I’d love to get a reservation on a tour to see these aurorae!” says Ofer Cohen, a SHINE-NSF postdoctoral fellow at the Harvard-Smithsonian Center for Astrophysics (CfA).

The Northern and, respectively, Southern Lights emerge when energetic particles from sun flares slam into our planet’s magnetosphere, which lead to protons being injected into the magnetic field. These get funneled towards the poles, and that’s how the light show gets eventually staged. For a more vivid and detailed explanation on how aurora borealis are formed check out the previous video-post I’ve written.

On a close proximity to a sun exoplanet subjected to a coronal mass ejection (CME), things would be a lot different though. Besides the huge energy levels compared to those on Earth’s aurorae, an exoplanet would get rapidly engulfed, resulting an eruption that will light up equatorial regions, rippling from the north to south poles over six hours, eventually fading as the geomagnetic storm energy is dissipated.

“The impact to the exoplanet would be completely different than what we see in our solar system, and much more violent,” says co-author Vinay Kashyap of CfA.

Check out this animation of a stunning aurorae ripple around a “hot Jupiter” below.