by Mihai Andrei
in Alien life, Astrophysics
Reading Time: 4 mins read
A A
Share on FacebookShare on TwitterSubmit to Reddit

Earth is not the only place in the solar system to hold watery oceans: Enceladus, one of Saturn’s moons also holds a liquid ocean, albeit one that is covered by ice. However, Enceladus is still an extremely exciting place to find extraterrestrial life – not only because of the water it holds, but because water is in contact with the moon’s rocky core, so elements useful for life, such as phosphorus, sulfur and potassium, will leach into the ocean – making it a potential habitat for life.

Enceladus is the sixth-largest of the moons of Saturn, with a mean radius of 252 km (156 miles). In 2005, the Cassini spacecraft spotted what appeared to be plumes of water shooting into space from cracks in the icy surface of Enceladus. The only reasonable explanation would be that the moon has an ocean of liquid water under the ice. Now, a team led by Luciano Iess of the University of Rome confirmed that the ocean exists, and also showed that, like Earth’s, it doesn’t cover the entire surface.

But how could a salty liquid ocean exist, under ice, in Saturn’s area – so far away from the Sun? The likely cause is gravity: as the moon moves around Saturn, tidal forces from the planet and the other moons flex and bend the core of the planet, creating friction – therefore heat. This melts the ice, maintaining a liquid ocean.

Gravitational measurements made by the Cassini spacecraft revealed that a 10km-deep ocean of water, larger than Lake Superior, lurks beneath the icy surface of Enceladus at the moon’s south pole; the liquid ocean reduces the volume of the southern hemisphere, so judging by the larger volume of the northern hemisphere, it’s likely that the ocean can only be found in the southern areas.

David Stevenson, a planetary scientist at the California Institute of Technology in Pasadena, said the body of water was so large it “may extend halfway or more towards the equator in every direction. It might even extend all the way to the north.”

So what does this mean? Is it far fetched to think that Enceladus could host life? No, not really. There are clear indications that it is habitable – the temperature is right, you get liquid water, and you get some important chemical elements for life, so Enceladus might be the perfect place to look for life (probably microscopic life).

“The question is what conditions do you need to form life and, of course, we don’t know what temperature the ocean is today, nor do we know what it was back in the geological past. But it’s conceivable that it was warm enough, with circulation of water coming from the silicate core as well, to allow life to form even if today that ocean is maintained by antifreeze and is slightly below the freezing point,” said Jonathan Lunine, a member of the team at Cornell University in New York. The antifreeze in question is salt, which reduces the temperature at which water freezes.

Enceladus is not the only moon which sports a liquid water the ice: we’ve written several articles about Europa, a moon of Saturn, and how promising it is. Europa has a more extensive, global ocean under the surface – it is regarded by many as the most likely place to host life in our solar system (bar Earth). But Enceladus also has researchers rubbing their hands due to its vapour plumes from the south pole which also contain organic molecules – possible, but not clear signs of life. 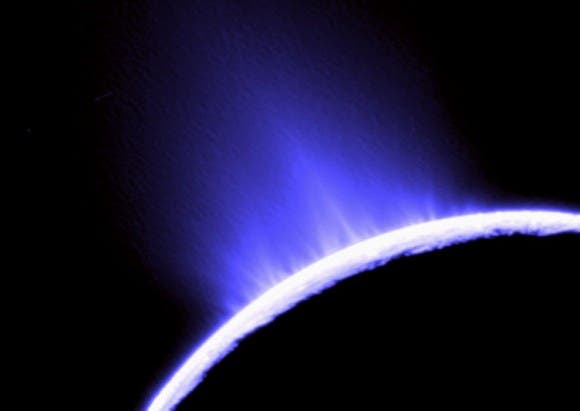 To me, the next step here is to establish permanent satellites around Europa and Enceladus, and gather as much geological information as possible, and in time (why not?) land a rover there. The main problem, is, of course, the funding.

“There are now several lines of evidence – the geysers, the plume chemistry, and now gravity – that indicate a substantial body of liquid water. For astrobiology this is confirmation of what we expected and is good news. My one view is that Enceladus should be the priority.”

Chris McKay, an astrobiologist at Nasa’s Ames Research Centre in California, said: “There are now several lines of evidence – the geysers, the plume chemistry, and now gravity – that indicate a substantial body of liquid water. For astrobiology this is confirmation of what we expected and is good news. My one view is that Enceladus should be the priority.”