Astronaut Scott Kelly returns home after a year in space

by Dragos Mitrica
in News, Space, Space flight
A A

Today is homecoming day for a record-setting crew. Three Expedition 46 crew members from the International Space Station are finishing packing the Soyuz TMA-18M spacecraft for the ride home today, ending their record-setting mission.

In November 2012, NASA, the Russian Federal Space Agency (Roscosmos), and their international partners selected two veteran spacefarers for a one-year mission aboard the International Space Station in 2015. Scott Kelly was the perfect candidate: experienced, knowledgeable, and a twin. The twin part was a bonus which will allow doctors to study how the body changes after a year in space and enable NASA to better prepare for longer trips. Part of this research also includes a comparative study on the genetic effects of spaceflight with Scott’s twin brother Mark as the ground control subject.

After handing over command of the International Space Station to astronaut Tim Kopra, Kelly will join Mikhail Kornienko and Sergey Volkov for a trip back home. He spent a record-breaking 340 days in space. Upon arrival, they will be monitored by doctors to see how their bodies have adapted to the year in space, and how it will re-adapt to Earth.

Prior to his mission Kelly was asked about what it will be like to command the ISS:

“Certainly as the commander you’re responsible for safety and the health of your people and making sure they have everything they need to do their jobs. I’ll certainly be conscious of those things but we’re all professionals, we all understand what we need to do, and we’re all kind of self-starters and kind of take care of ourselves very well so it shouldn’t be much different than when Doug Wheelock, the previous commander, was in charge.” 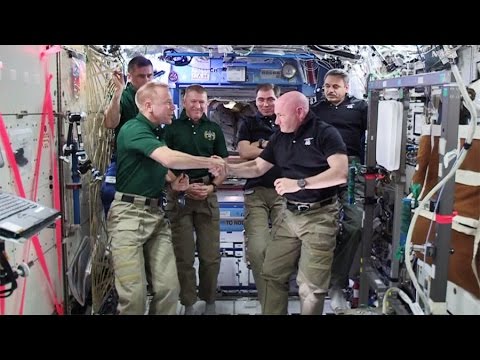 Now, after passing command, he seems rather sad and a bit sentimental – not about passing command, but about having to leave space and returning to Earth. After he sees how some things are down here, he might want to return.