by Mihai Andrei
in Remote sensing, Space
Reading Time: 1 min read
A A
Share on FacebookShare on TwitterSubmit to Reddit 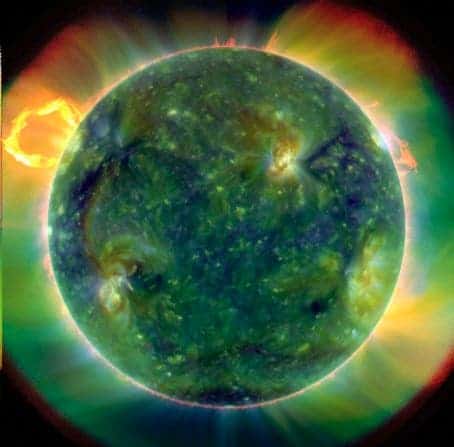 A huge plasma eruption that took place on the Sun has caused a “solar tsunami” of ionized atoms that are on a course for our planet on Tuesday night. Nothing to be too alarmed here, except for the disruption of some satellites.

It will however generate quite a show, a rare and unpredictable one too.

“It’s the first major Earth-directed eruption in quite some time,” Leon Golub of the Harvard-Smithsonian Center for Astrophysics told Space.com

NASA’s Solar Dynamics Observatory was launched in February, with the goal of looking into the Sun and figuring out how phenomena such as this work. The best show will be in North America, and it could also trigger some aurorae, which will make it even more awesome. Be sure to keep an eye on the sky tonight.