Precisely today, October 4, 55 years ago one of the most important milestones in human spaceflight took place. Then, the first ever artificial satellite, the soviet Sputnik, was launched into space and into Earth’s orbit, signaling the start of the space race, while also sparking an unprecedented support for sciences in American schools. 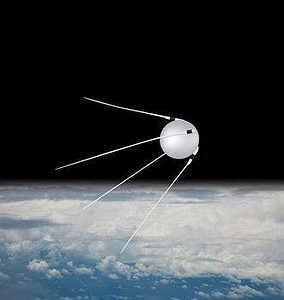 As the huge 184 pounds Sputnik flew by the American continent each day and night, a wave of paranoia ensued. If the Russians could put that much mass into space, they could very well put anything. Although Sputnik was very heavy, its instruments were extremely rudimentary, even for that time – a simple transmitter that beeped, another piece of hardware that changed the frequency of the beep function of temperature and a huge battery to power the instrument. Yet, everybody thought that Sputnik was spying on them.

There was some good that came off this intense paranoia though. From Sputnik on, the US government invested billions in science education and research, started nurturing gifted students in sciences and foreign languages and founded the National Aeronautics and Space Agency (NASA), charging it to create a civilian space program. Most importantly, Sputnik can be identified as day 0 of the golden space era; a period where space flight development finally saw a budget rivaling that of the defense industry, and which led to some of the most satisfying moments in history – the first man in space or the first man on the moon.

After the cold war ended, a downward trend of space exploration achievements commenced, as budgets got ever thinner. Hopefully, social and governmental consciousness can be shifted towards the sciences and space exploration once more, not guided by fear, but out of reason.