After visiting the Franz Josef Land archipelago in the Arctic, Putin claimed that human activity is not connected in any way to global warming, saying:

“The warming, it had already started by the 1930s,” Putin said in comments broadcast from an Arctic forum held in the northern Russian city of Arkhangelsk. “That’s when there were no such anthropological factors, such emissions, and the warming had already started.” 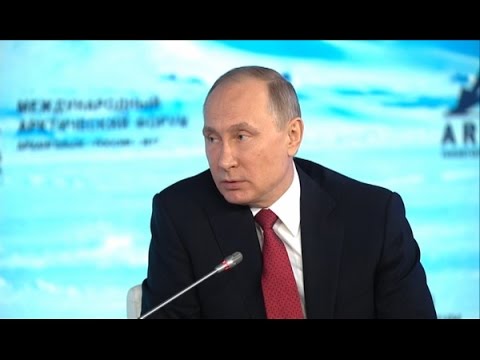 Needless to say, that’s complete and utter nonsense. For starters, humans were emitting emissions in the 1930s (in fact, ever since the start of the industrial age), though at a much lower rate. It’s debatable whether or not climate change was having noticeable effects in the 1930s. But Putin’s statement gets even better.

He supported his argument by saying that an Austrian explorer who had a “photographic memory” visited the Franz Josef Land archipelago “in the 1930s.” He didn’t say who this mysterious explorer is, but then he added that 20 years later, this explorer was shown photographs from another expedition “by the future king of Italy” and concluded that “there were fewer icebergs there,” Putin said. This whole thing reeks of baloney, but once again, it gets even better. Let alone that his “evidence” was the “photographic memory” of a mysterious explorer, but back then, Italy didn’t even have a king.

So… yeah. Let’s all just ignore what decades and decades of research are concluding, what some of the world’s brightest minds are saying, with a 97% consensus — Putin just recalled a story with two characters (one unnamed, the other inexistent) which invalidates all that science.

Previously, Putin has hailed global warming as a good thing, saying that with two or three degrees more, Russians wouldn’t need fur coats. He was also thrilled that global warming was melting the ice and exposing natural resources and transport routes which had long been too expensive to exploit. It should also be said that Russia is the world’s largest natural gas exporter and the country’s economy greatly relies on fossil fuels.

Hey, at the very least, the presidents of the US and Russia are getting along on something, that should be worth something, isn’t it? Trump has called climate change fake and has tweeted that “The concept of global warming was created by and for the Chinese in order to make U.S. manufacturing non-competitive.”