The Five Weirdest Things People Have Tried To Combine With Guns

Here are five real guns that stopped to look at both convention and common sense only shoot them point-blank in the faces.

by Henry Conrad
in Science
Reading Time: 5 mins read
A A
Share on FacebookShare on TwitterSubmit to Reddit

Guns are ridiculously unfair. That’s a fact of life. Hell, just ask any gamer – more often than not, the most powerful and in-demand weapons are ALWAYS firearms. And why wouldn’t they be? The ability to just stand on top of a building and shoot the heck out of every newbie running around armed with just a knife and unwarranted self-confidence is well worth all of the insults, curses, and accusations of cheating that will inevitably be thrown at you post-fight.

The invention of this little murder-spitting mechanism paved the way for even more ideas on how to improve them (read: make them kill more things faster). Pretty soon, all kinds of guns were developed: sniper rifles, machine guns, shotguns, and even frigging rocket launchers. Apparently, creativity is best fostered in an environment that rewards innovation with a higher body count.

Unfortunately, not all creative ideas are good ideas. Here are five actual gun “enhancements” that really should have been shot dead even before they made it past the design sketches. 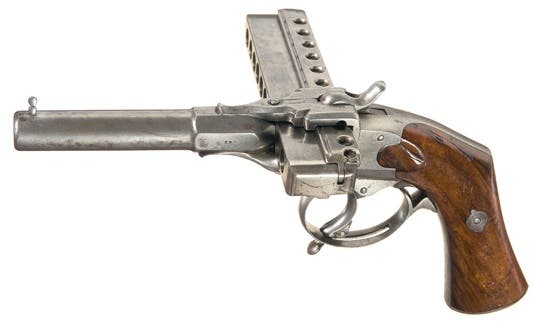 The harmonica gun is the bastard son of a six-shooter and the instrument you say you play when people ask you if you’re musically inclined. It’s a one-handed weapon with a loading chamber that looks like a harmonica instead of the usual rotating cylinder. It was an interesting design that didn’t really catch on, for quite a few reasons. For starters, it was cumbersome to use, as one had to manually slide the chamber after firing a shot. This also naturally meant that, more often than not, the weight of one side of the gun would be heavier than the other, making it hard to aim. Furthermore, the risk of leaving the magazine between chambers and subsequently causing the weapon to fire in rapid succession meant that you might as well have taken a knife and cut your fingers off yourself.

You can’t actually play any songs with it, either, which is kind of a relief, considering that putting a gun anywhere near your own mouth is generally a terrible idea. 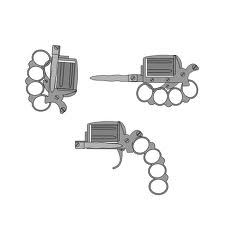 A Brass Knuckle (and a Knife)

The Apache Revolver, which sounds more like it belongs with the Super Friends than in actual combat, was probably the closest thing we ever had to a bullet-spewing Swiss Army knife. Featuring a knuckle duster that could be folded up into the gun and a small knife that was hidden under the barrel, the Apache Revolver definitely looked like a formidable weapon. Unfortunately, like many “combination” items, it took three weapons of varying efficiency and turned them into a confused multi-tool of mediocrity. It was terrible as a gun because of its limited range and poor accuracy and, while it was particularly lethal in close quarters, it also raised the question of why you’d even consider it over, you know, an actual brass knuckle or knife. 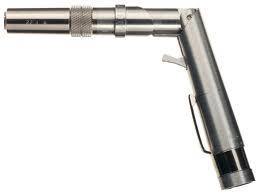 Most likely designed for people who really, REALLY wanted to be James Bond, the Stinger Pen Pistol is a gun that looks rather like a fat pen. It had to be folded into a sort of “gun mode” before it could be used, probably to make sure that you don’t end up shooting off your nipple when you put it in your shirt pocket. First produced in the 1990’s and presumably discontinued soon after, this gun is usually available nowadays as a novelty item, popping up every now and then for a few hundred bucks.

If you thought gun manufacturers couldn’t possibly figure out more ways to let you accidentally shoot yourself in the crotch, well, you thought wrong. As early as the 16th century, jailers were granted the use of key guns, which were, quite simply, guns that looked like keys, with the key loop serving as the trigger. This was probably handy for jammed locks and rowdy prisoners. Unfortunately, that still doesn’t make up for the fact that people actually thought turning something usually hanging dangerously close to your legs into a functional miniaturized gun was a sound idea.

The TrackPoint XS1 is the most technologically-advanced firearm on this list. It’s a “smart rifle” that has a remarkably long range, is capable of auto-aiming, and can even record and share videos on social media. It’s also ridiculously expensive, which is a good thing because this isn’t exactly the kind of gadget you want everyone to have easy access to. This isn’t a business phone or a laptop; it’s a high-powered gun that lets you kill things from a ridiculous distance without even having to aim properly. This is also the perfect gun for you if you’ve ever felt the need to let all of your Facebook friends know that you Like such activities as “Hunting Deer”, “Shooting Bottles from the Other Side of the House”, and “Looking at You Right Now through a High-Powered Scope”.

On the bright side, humanity has yet to come up with anything even close to the level of Squall Lionheart’s gunblade in the Final Fantasy games. We should always count our blessings.