NASA eavesdropped on the Sun, and they made a video so you can hear it too

With a bit of help from NASA, you can now hear the sun's roar -- and it's glorious.

With a bit of help from NASA, you can now hear the sun’s roar — and it’s glorious.

Although you never hear it, the Sun is actually pretty loud. This massive body of superheated, fusing plasma, is rife with ripples and waves generated by the same processes that generate its light and heat — and where there’s motion, there’s sound. We never get to hear it, however, as the huge expanse of nothing between the Earth and the Sun acts as a perfect acoustic insulator.

With some of ESA’s (the European Space Agency) data and a sprinkling of NASA’s magic, however, you can now hear the Sun churn in all of its (surprisingly tranquil) glory.

“Waves are traveling and bouncing around inside the Sun, and if your eyes were sensitive enough they could actually see this,” says Alex Young, associate director for science in the Heliophysics Science Division at NASA’s Goddard Space Flight Center.

What Young is referring to are seismic waves, a type of acoustic waves — the same kind of motion that causes earthquakes in rocky planets — that form and propagate inside the Sun. Hypothetically, if you were to look at the star with the naked eye, you could actually see these waves rippling through its body and surface. Stars are formed of a much more fluid material than most planets, and so their bulk flows more readily under the sway of seismic waves — wiggling just like a poked block of Jell-O.

As most of us learned in early childhood, however, one cannot look directly into the Sun for long. Luckily for us, ESA recently embarked on a one-of-a-kind mission: they sent the Parker Solar Probe hurtling towards our star. Using its SOHO Michelson Dopler Imager (MDI) instrument, the probe recorded these motions inside the Sun. Researchers at NASA and the Stanford Experimental Physics Lab later processed into a soundtrack.

It’s not half-bad, as far as tunes go. I actually find it quite relaxing. Check it out: 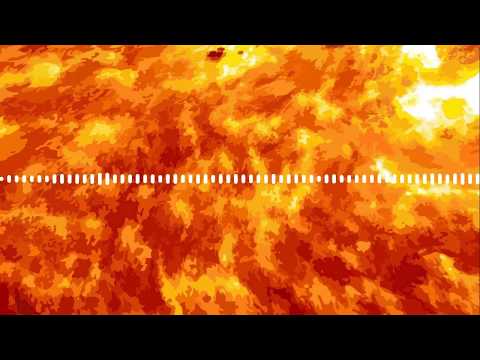 The sounds you hear in NASA’s clip are generated by the motions of plasma inside the Sun. These are the same processes that generate local magnetic fields inside the star and push matter towards the surface, causing sunspots, solar flares, or coronal mass ejections — the birthplace of space weather.

Space weather phenomena are associated with intense bursts of radiation, to which complex technological systems are susceptible. So most of our infrastructure, from satellites — and with them, cell phone networks, GPS, and other types of communication — transportation, and power grids.[/panel]

It took a great deal of work to turn the readings from Parker into something usable. Alexander Kosovichev, a physicist at the Stanford University lab, processed the raw SOHO MDI data by averaging Doppler velocity data over the solar disc and then only keeping low degree modes. These low degree modes are the only type of seismic waves whose behavior inside stars is known and accessible to helioseismologists. Afterward, he cut out any interference, such as sounds generating by whizzing of instruments inside the craft. He then filtered the data to end up with uninterrupted sound waves.

While scientists probably enjoy a groovy track just as much as the rest of us, the soundtrack actually has practical applications. By analyzing the sounds, researchers can get a very accurate picture of the churnings inside of our Sun — much more accurate than previous observations could provide.

A more comprehensive understanding of the motions inside the Sun could allow researchers to better predict space weather events.