The new stars in bug-killing.

by Alexandru Micu
in Discoveries, Health & Medicine, News, Science
Reading Time: 3 mins read
A A
Share on FacebookShare on TwitterSubmit to Reddit

Bacteria are an adaptable lot. We’ve learned before just how incredibly fast these bugs can learn to thrive in antibiotics which took us decades to develop. A new approach in medicine is to use physical rather than chemical means of killing these single-cell organisms. And now we have another such weapon: a team from the Melbourne School of Engineering has developed a new class of star-like protein chains or “peptide polymers,” that can effectively kill bacteria which are impervious to current antibiotics.

Professor Greg Qiao from the school’s Department of Chemical and Biomolecular Engineering and his team said that the only real avenue of treatment currently available for infections caused by bacteria is antibiotics. But he’s worried that if we continue the arms race with bacteria in this way, we will be left defenseless in a few decades.

“It is estimated that the rise of superbugs will cause up to ten million deaths a year by 2050. In addition, there have only been one or two new antibiotics developed in the last 30 years,” he said.

The team has been working with peptide polymers for the past few years, looking for a way to weaponize them in our favor. Recently, they developed a star-shaped polymer that might become one of the best foot-soldier in this fight. And the upshot is that the substance is harmless to the patient.

Tests undertaken on mice have shown that the polymer is extremely effective at killing Gram-negative bacteria — a class known for its propensity to develop antibiotic resistance. The bacteria showed no signs of resistance against the peptide polymers, and the little ninja stars have shown they can destroy bacteria through multiple pathways, unlike most antibiotics which kill with a single pathway — meaning they can be used to cure several types of bacteria.

“Comprehensive analyses using a range of microscopy and (bio)assay techniques revealed that the antimicrobial activity of SNAPPs [the polymers] proceeds via a multimodal mechanism of bacterial cell death by outer membrane destabilization, unregulated ion movement across the cytoplasmic membrane and induction of the apoptotic-like death pathway,” the paper reads. 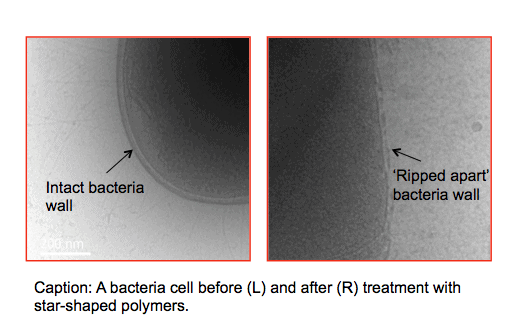 One of these pathways includes ‘ripping apart’ the bacteria cell wall.
Image credits University of Melbourne.

They’ve also determined experimentally, by testing with red blood cells, that you’d have to pump 100 times the effective dosage into a patient for it to become toxic to the body. While more research is needed to bring the ninja stars of bactericide to market, Professor Qiao and his team believe that their discovery is the beginning of unlocking a new treatment for antibiotic-resistant pathogens.