Scientists coax bacteria to assemble into a pressure sensor

Living electronics could be a game changer.

by Tibi Puiu
in Biology, Electronics, News
A A

Electronics don’t necessarily have to be built out of inanimate wires and silicon. American scientists, for instance, programmed living cells seeded with metal nanoparticles to assemble into one of the components of a pressure sensor.

It makes sense to employ biological processes in engineering since nature has mastered fabricating both living and non-living components. Just take a look in the mirror if you need proof. Your organs, hands, skin or, most importantly, your brain all started from a single cell that divided and divided and later differentiated into all sorts of specialized tissue, all coded by a genetic blueprint. We and other organisms do this by combining inorganic and organic matter from the environment. Some mollusk species, for instance, will mix calcium carbonate (a mineral dissolved in seawater) with small amounts of proteins their cells produce to increase shell strength. Similarly, our bones are made from collagen — them most abundant protein in our bodies — mixed with inorganic minerals.

Taking cues from nature, a team of researchers at Duke University led by Lingchong You genetically engineered the common E. coli bacteria with a gene circuit that directs cells to produce certain proteins. The modified bacteria was introduced into a nutrient solution that encouraged it to grow, eventually producing a protein called T7 RNA polymerase (T7RNAP), which, in turn, triggers the production of a small molecule called AHL that diffuses into the cell’s environment and acts as a messenger.

Because T7RNAP activates its own expression in a feedback loop, the cells kept on proliferating until the AHL concentration hit a critical concentration threshold. At this point, the production of two more proteins is triggered. The first, called T7 lysozyme, inhibits the production of T7RNAP so the cells stop growing. The second, called curli, works like a sort of biological Velcro that latches onto inorganic compounds.

The gist of it all is that all of these biological interactions eventually cause the bacterial colony to grow in a dome-like shape for as long as it has food. When a suspension of gold nanoparticles is added to the dome, the outermost bacteria grab onto the metal with the help of the Velcro proteins, forming a gold shell about the size of a freckle, as reported in Nature Biotechnology.

In an experiment, the researchers grew two such bacterial domes embedded with gold nanoparticles and then sandwiched them together, with the gilded side inward. Each side was connected in a circuit with a battery and LED. Merely pressing one side of the bacterial sandwich reduced the electrical resistance, causing the current to flow and the LED to switch on. The LED’s brightness corresponds to the amount of pressure applied. Essentially, the researchers had built a pressure sensor with bacteria and metal, which is quite impressive.

What’s beautiful about this method is that the 3D structure grows by itself on the principle of cellular self-assembly. This scaffold can then be used in industrial applications to build a device with desirable physical properties. It’s all done with the help of nature, with some guiding by human hands along the way. At the fundamental level, it’s not all that different from how a cell is programmed to grow into an entire tree. And this is just the beginning — bacteria are known to form extremely complex branching patterns that could be exploited in surprising ways. We don’t know how to make these patterns ourselves yet, but we’ll learn along the way. 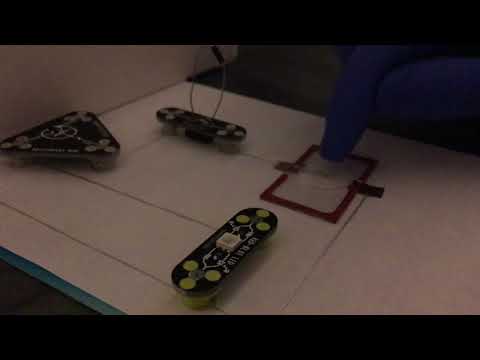