With Flink, researchers will be able to 3D print living minifactories

Ever needed a tiny, living factory? Of course you did, you just didn't know it.

by Alexandru Micu
in Biology, News, Science
A A

Material scientists are bringing life to 3D printing by mixing bacteria in the inks. Christened ‘Flink’, the compound shows a lot of promise in the fields of medicine and biotechnology.

Tired of creating objects out of old, boring, downright inanimate matter? Researchers from the Swiss Federal Institute of Technology (ETH Zurich) has got you covered. Led by Professor André Studart, Head of the Laboratory for Complex Materials, the team have developed a novel 3D printing system that uses bacteria-laden ink. It can be used to print miniature biochemical factories whose properties and effects depend on the species contained in the ink.

The base compound of Flink is a biocompatible hydrogel, made of hyaluronic acid and pyrogenic silica. The hydrogel’s role is to keep everything together and maintain the structure of the printed objects. A culture medium is mixed in with this framework, keeping the bacteria in the ink alive and kicking. The final ingredient is the bacteria strain. The finished ink can be then used to print any structure, akin to a normal 3D-printing plastic or metal ink.

Up to four different inks (each containing different species) of various concentrations can be combined in a single pass, leading to a great possible range of properties for the end objects. After taking some time to settle in, these bacterial strains will go ‘online’, either producing, consuming, or otherwise interacting with compounds in their environment. In effect, they’ll work like tiny, living factories whose internal processes can be altered by changing their bacterial make-up.

The working concept behind Flink has so far been tested using the bacteria Pseudomonas putida and Acetobacter xylinum. The former can metabolize phenol (carbolic acid), a widely used industrial commodity that comes in a volatile, solid form. Phenol is quite toxic, and its predisposition to turning gaseous makes it very hazardous to work with, increases the likelihood of spillages, and complicates disposal. Xylnium is known for its high-purity nenocellulose secretions. It comes in very handy for dressing wounds and burns, as the substance is highly stable, helps relieve pain, and retains moisture.

Getting the gel’s viscosity just right was a particular challenge, according to co-author Manuel Schaffner. It has to be fluid enough to easily pass through the printer’s nozzles, but not too fluid, or it wouldn’t hold firm after printing. At the same time, the substrate couldn’t be too firm, either, as that would limit the bacteria’s mobility. For example, the researchers showed that if the hydrogel was too stiff, Acetobacter would secrete drastically less nanocellulose.

In the end, the team settled on a consistency similar to hand-cream. They found that this allows the bacteria to go about their business unhindered while keeping ink layers hardy enough to support the bulk of subsequent layers.

“The ink must be as viscous as toothpaste and have the consistency of Nivea hand cream,” Schaffner explains.

The researchers believe that their work “has enormous potential”, given the vast diversity of useful bacteria strains. Potential applications include 3D-printed sensors aimed at detecting toxins or pathogens in drinking water. Alternatively, Flink-borne filters could be employed in scrubbing (environmentally disastrous) oil spills. You can see the printer at work below: 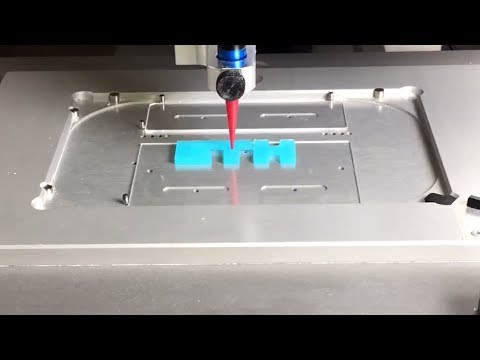 “Most people only associate bacteria with diseases, but we actually couldn’t survive without bacteria,” says Patrick Rühs, paper co-author. “However, the researchers believe their new ink is completely safe. The bacteria they use are all harmless and beneficial.”

Still, the research is still in its initial stages. For one, the team hasn’t studied the lifespan of their printed minifactories just yet. However, they “assume” that the bacteria embedded therein can “survive […] for a very long time” as they “require very little in the way of resources”. There are also issues with printing time (which is quite slow) and scalability (which is proving difficult). Currently, the Acetobacter Flink takes several days to produce biomedically-significant quantities of cellulose.

However, the team is convinced that they’ll be able to solve such teething issues, and further optimize and accelerate the processes.

The paper “3D printing of bacteria into functional complex materials” has been published in the journal Science.