If fully developed, driverless cars are faster, cheaper, safer and more eco-friendly than human drivers. The only problem is, if you want them to work fine, you have to test them in real conditions – and few cities are willing to volunteer for that. But with California approving self-driving cars in 2015, and China also investing huge money in a similar project,  it seems to be a matter of time before driverless cars hit the streets. As countries such as the UK are struggling to find a way to safely test them on the streets, the University of Michigan found a different (yet costly) solution – they are creating a replica city as a testing facility.

The city will cover 32 acres and will include merge lanes, traffic lights, roundabouts, a railroad crossing, and “eventually even a mechanical pedestrian” – everything you need to test things out. In time, the city will also have a myriad number of faux pedestrians that will “surprise” the vehicles as obstacles as they traverse the course Here’s a diagram: 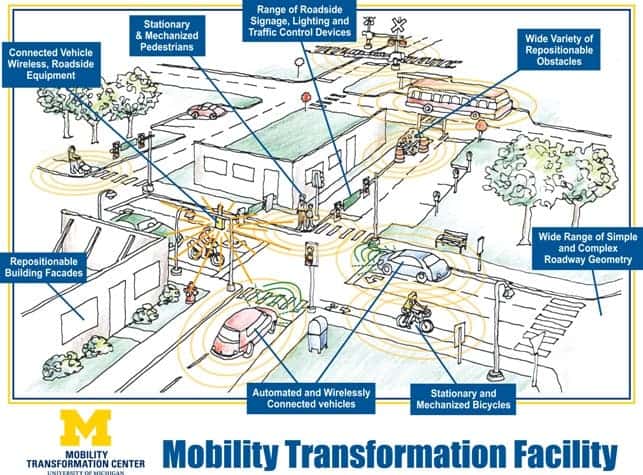 “We will actually be writing code for the test facility,” said Edwin Olson, an assistant professor of computer science and engineering at the university. “We’ll be able to trigger tricky traffic signal times, or a pedestrian stepping into the intersection at just the wrong time, for example.”

The point here is to see how well the cars would fare in typical driving conditions, and also in typical weather (which can sometimes have a significant impact on driving). It will test how well they deal with unexpected situations: “tricky traffic signal timings, or a pedestrian stepping into the intersection at just the wrong time,” as Edwin Olson, an assistant professor at the university, puts it.

The replica city should be up and running in just a few months, and initially, it will be used to test a Ford Fusion car. The Ford Fusion is just partly automated – it can drive itself, but it also has someone in the drivers’ seat. But more cars will be tested there, including fully automated cars.

Personally, the only downside of the project I can see are the costs – it will cost quite a lot to develop even such a small city. But apparently, there’s been quite a lot of negative reactions to it, with some going as far as calling the facility a “Hunger Games arena for driverless cars“. The claim didn’t go well with project leaders, and it’s easy to understand why:

“The driverless vehicles hope not for death, but a birth of findings and understanding in order to make cars without drivers a real, viable solution for the future.”

Personally, I hope their project is successful and safe driverless cars hit the road in the near future – we sure know we could use them.