What scientists learned after they trained spiders to jump on demand

This study might help scientists build a new generation of super-agile micro-robots.

British researchers have trained a spider to jump on demand for the first time. In doing so, they learned what enables the arachnids to jump different distances and over huge heights relative to their size.

“Spiders represent a unique class of natural jumping insects — they offer exemplary jumping behavior at the small scale with evidence of intelligence in assessing surroundings and planning prey capture. Our results suggest that the form of jumping within spiders is rather different from those seen in other insects, and reflects the specialisations for short-range high speed jumps,” Dr. Mostafa Nabawy, a researcher at the University of Manchester and lead author of the new study, told ZME Science.

Nabawy and colleagues worked with regal jumping spiders (Phidippus regius), which they trained to jump between two platforms in a laboratory setup. This was rather challenging since the spiders were reluctant to jump at the whim of some humans. Out of the four jumping spiders recruited for the study, “only one was happy to jump as required,” Nabawy told me.

Researchers recorded the spider, nicknamed Kim, as it jumped different heights and distances on a man-made platform using ultra-high-speed cameras. Micro CT scans were also performed to create a 3D model of the spider’s legs and body structure.

The analysis revealed that this particular species of spider employs various strategies to jump over an obstacle, depending on the magnitude of the challenge. When it had to jump over shorter, close-range distances, Kim took a faster, lower trajectory which consumes more energy but minimizes the jump time. Although it uses up more energy this way, the spider makes up for it in accuracy, increasing its odds of capturing prey. However, when Kim had to jump across longer distances or higher on an elevated platform, the spider reduced the amount of energy it used. 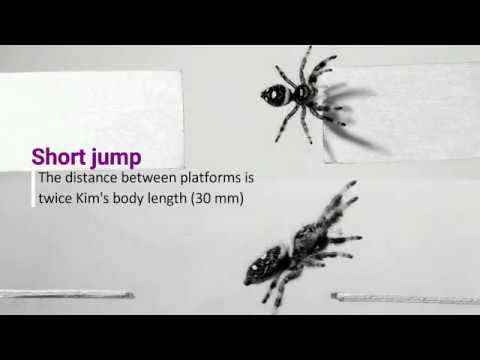 Scientists have been aware for more than 50 years that spiders use internal hydraulic pressure to extend their legs. Up until now, however, it wasn’t clear whether this hydraulic pressure is actively used to enhance or replace muscle during the jump. When the University of Manchester team compared the performance of the jumping spider to that of insects, they learned that the estimated muscle power is sufficient on its own to power the jump. This suggests that the additional power from hydraulics is not essential.

The aim of this study was to investigate the jumping spider anatomy and its behavior. The insights that the researchers gained could now be used to design a new class of hyper-agile micro-robots. Jumping spiders can leap up to six times their body length from a standing start, while the best a human can achieve is only 1.5 body lengths. What’s more, the force they used to propel themselves can be up to 5 times the weight of the arachnid.

“Spiders represent a unique class of natural jumping insects – they offer exemplary jumping behavior at small scale with evidence of intelligence in assessing surroundings and planning prey capture. Our results suggest that the form of jumping within spiders is rather different from those seen in other insects, and reflects the specializations for short-range high-speed jumps,” Nabawy said.

“There are still more questions to answer mainly related to the in-depth understanding of the control strategies employed by jumping spiders as well as detailed characterization of legs actuation forces within the jump,” the researcher added.