Though they might look goofy, these assassins are ruthless killers.

by Tibi Puiu
in Animals, Biology, News
Reading Time: 3 mins read
A A

In Madagascar, one of the world’s most important biodiversity hotspots, scientists have identified 18 new species of pelican spiders. These tiny arachnids, some no bigger than a grain of rice, are named so because of their strange heads and mouthparts that uncannily resemble the famous pelican birds.

With their craning necks and enormous jaws, pelican spiders are some of the strangest creatures out there. When the first specimen was found in the 19th century inside 50-million-year-old amber, biologists thought they were dealing with an ancient long-lost lineage, as weird and unrelatable as the dinosaurs. But then people started to find live specimens and it soon became clear that these oddballs are still living in this day and age.

Though they may look cute, these spiders are ruthless assassins whose favorite prey is often their own kind. Instead of spinning their own web and catching insects like fellow arachnids, pelican spiders go out at night, following the webs spun by other spiders. The cunny spiders will even stroke the web to mimic the vibrations caused by a struggling insect to lure the web owner out. Once the unfortunate spider comes out to investigate, the assassin strikes its prey with its huge beak-like pincers known as the chelicerae. Make no mistake — this is a master hunter, the ninja slayer of the arachnids.

These crazy jaws aren’t just for hunting. When it’s sexy time, assassin spiders will flirt by vibrating their abdomens, along with specialized hairs that run on the jaws. When they’ve decided to mate, the two spiders line up belly to belly but facing away from each other, because, you know, of the big heads. Finally, the male will use its tiny modified pair of legs called pedipalps to grab sperm from his genital opening and place it in the female’s genital opening. 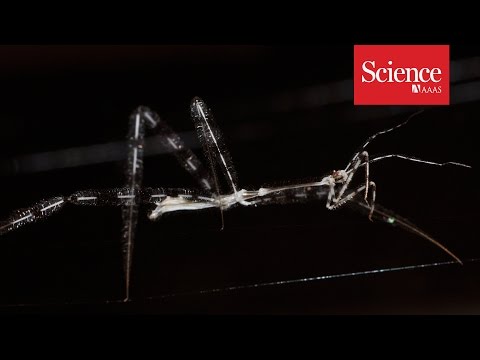 Once the spiderlings hatch, the family will stick together for a few more days until the babies suddenly decide to wander off and start to hunt. A new generation of ninja spiders is born. This type of behavior is quite common, it happens with more species than you’d think.

A team of arachnologists led by Hannah Wood from the Smithsonian National Museum of Natural History reports that pelican spiders are in much greater variety than previously thought. The scientists probed the anatomy of countless spiders looking for signs that distinguish one species from another. The easiest way to tell spider species apart is to study their genitals since males and females of the same species typically have specially shaped mating organs. If the two genitals don’t fit, then the spiders likely belong to a different species. This way, Wood and colleagues identified 18 new species of pelican spiders, some of them who had been previously misclassified. There are now 26 species of pelican spiders living in South Africa and Madagascar.

“I think there’s going to be a lot more species that haven’t yet been described or documented,” said Wood in a statement.

One of the key findings of the new paper is the definition of a new genus called Madagascarchaea. Previously, scientists generally agreed that such spiders should be lumped in with the members of Eriauchenius. Wood made a convincing case that they merit a genus of their own.

Wood and colleagues plan on doing more field work in Madagascar where they hope to even more new pelican spider species. There’s much we don’t know about these fascinating creatures, even though their roots can be traced back to as far back as 200 million years ago.

Findings appeared in the journal ZooKeys.