. Perhaps the most impressive feature of spider silk is that it's taut even when it's been stretched to several times its original size. Inspired by the orb spider's silk, researchers at University of Oxford and the Université Pierre et Marie Curie, Paris made their own artificial spider silk thread that extends like a solid, but compresses like a liquid.

by Tibi Puiu
in Animals, Materials, News
A A

Spider silk is maybe one of nature’s most high-tech materials. The silk has a tensile strength three times stronger than steel and it’s three times tougher than Kevlar, all while being as elastic as rubber. The thread is also sterile, biodegradable and sticky to catch unsuspecting prey. Perhaps the most impressive feature of spider silk is that it’s taut even when it’s been stretched to several times its original size. Inspired by the orb spider’s silk, researchers at University of Oxford and the Université Pierre et Marie Curie, Paris made their own artificial spider silk thread that extends like a solid, but compresses like a liquid.

“The thousands of tiny droplets of glue that cover the capture spiral of the spider’s orb web do much more than make the silk sticky and catch the fly,” said Oxford Professor Fritz Vollrath, of the Oxford Silk Group. “Surprisingly, each drop packs enough punch in its watery skins to reel in loose bits of thread.” They’ve released a small video showing what that reeling-in process looks like.

It was this glue that the researchers sought to replicate. It wasn’t easy, though. The team had to find the delicate balance between fiber elasticity and droplet surface tension.

“Spider silk has been known to be an extraordinary material for around 40 years, but it continues to amaze us,” said Hervé Elettro from the Université Pierre et Marie Curie. “While the web is simply a high-tech trap from the spider’s point of view, its properties have a huge amount to offer the worlds of materials, engineering, and medicine.”

They finally got the knack of it using a plastic fiber and oil droplets, which you can see in action in the video below. 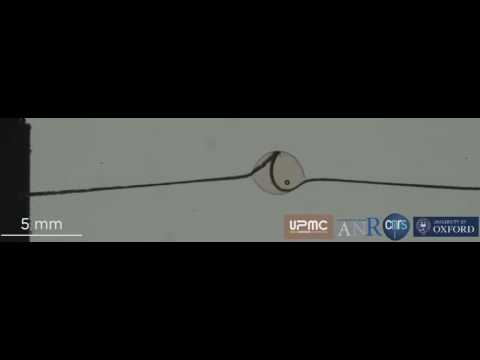 “Here, we unravel the physics underpinning the unique behavior of this ”liquid wire” and demonstrate that its mechanical response originates in the shape-switching of the silk filament induced by buckling within the droplets. Learning from this natural example of geometry and mechanics, we manufactured programmable liquid wires that present previously unidentified pathways for the design of new hybrid solid–liquid materials,” the researchers wrote in PNAS.

The “liquid wire” could lead to “a wide range of applications, such as microfabrication of complex structures, reversible micro-motors, or self-tensioned stretchable systems,”  Elettro said.