People who excessively rely on their smartphones scored lower on tests which gauged cognitive abilities like analytical thinking than those who use their smartphones less frequently. The results reported by psychologists at University of Waterloo suggest that using smartphones to find answers to questions - difficult or not - via search engines makes you lazy and less apt at solving problems.

by Tibi Puiu
in News, Psychology
Reading Time: 3 mins read
A A
Share on FacebookShare on TwitterSubmit to Reddit

People who excessively rely on their smartphones scored lower on tests which gauged cognitive abilities like analytical thinking than those who use their smartphones less frequently. The results  reported by psychologists at University of Waterloo suggest that using smartphones to find answers to questions – difficult or not – via search engines makes you lazy and less apt at solving problems.

In three studies involving 660 participants, the researchers examined various measures including cognitive style ranging from intuitive to analytical, plus verbal and numeracy skills. They then assessed the volunteers’ smartphone habits.  Based on the results, the participants were classed as either intuitive thinkers (more prone to rely on their guts to make decisions) and analytical thinkers (more prone to approach problems in a logical process). Intuitive thinkers frequently use search engines to solve problem, while analytical thinkers tend to rely on their own brainpower, as reported in Computers in Human Behavior.

“They may look up information that they actually know or could easily learn, but are unwilling to make the effort to actually think about it,” said Gordon Pennycook, co-lead author of the study, and a PhD candidate in the Department of Psychology at Waterloo.

“Decades of research has revealed that humans are eager to avoid expending effort when problem-solving and it seems likely that people will increasingly use their smartphones as an extended mind,” said Nathaniel Barr, the other lead author of the paper, and a postdoctoral researcher at Waterloo. 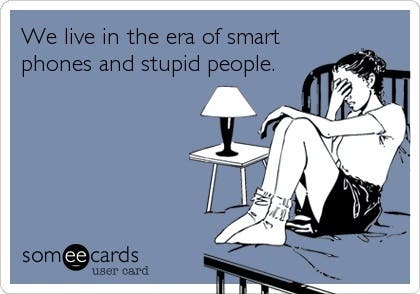 “Our reliance on smartphones and other devices will likely only continue to rise,” said Barr. “It’s important to understand how smartphones affect and relate to human psychology before these technologies are so fully ingrained that it’s hard to recall what life was like without them. We may already be at that point.”

Barr has a point. Why learn to read a map when you’ve got Google Maps? To me, however, this doesn’t seem like a new dilemma. Technology is making our lives easier by taking load off, be it physical or cognitive. Sure, you don’t have to know to solve a third order equation when you can plug in your data entry in a software and instantly get the results, but you should at least know how these work – in principle. The researchers’ findings seem to suggest that smartphones and, by extension, other technologies are making us stupider. I would argue however that the adverse effects of technology mostly surface in lazy people. Proactive individuals will use technology to their advantage by freeing cognitive space and concentrating a more important problems, otherwise unapproachable without technology in the first place. For instance, a study I reported earlier found that when people know they can store information on a computer, they can form memories much easier.