“What is time?” Could you answer this question like a sixth grader?

by Tibi Puiu
in Physics, Science 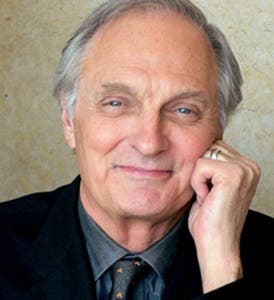 You might not know this, but 76-year old actor Alan Alda, known for his role as Capt. Benjamin Franklin “Hawkeye” Pierce in the longstanding television series MASH, is a dedicated science enthusiast.

A visiting professor at Stony Brook University, where he also founded the  Center for Communicating Science, Alda has sought for many years to increase scientific awareness as an indispensable part of modern society. The center founded by him has made many efforts to popularize sciences, either explaining in layman terms popular natural phenomena or sparking curiosity about sciences. Part of such efforts is a contest launched last year, when people from around the world were invited to explain in terms that would be easily comprehensible for an 11-year-old student “what is a flame”.

The question didn’t come by accident. As an 11-year-old boy himself, having found himself thirsty for an answer to this very question, young Alan Alda was left dishearten when his teacher gave him a disappointing answer.

“I was 11 and I was curious. I had been thinking for days about the flame at the end of a candle. Finally, I took the problem to my teacher. ‘What’s a flame?’ I asked her. ‘What’s going on in there?’ There was a slight pause and she said, ‘It’s oxidation.’ She didn’t seem to think there was much else to say,” he wrote in a guest editorial in the journal Science in March.

The contest was a huge success, with more than 800 people submitting their replies, which were judged by  6,000 11-year-old judges. This year’s edition of the “Flame Challenge” is centered around the question “What is time?”. This time the question was picked from more than 300 submissions by 11-year-olds across the country.

“This contest probably gives people the impression that it’s a teaching tool for kids,” Alda told Frank Eltman of the Associated Press. “That’s a happy by-product, but it really is a tool for scientists to take a complex question and explain it in a way the rest of us can understand.”

We really love what Alda and his foundation are doing for science, and coincidentally we’re striving for the exact same thing with ZME Science – communicating to people what science is all about and deconstructing myths around it by presenting science in a common tongue. Check out this video below of Alda recounting an otherwise terrifying near-death experience, but which evolved into a scene that perfectly illustrates how clearly and concise language can communicate science.

Last year’s contest was won by Ben Ames, 31, an American currently studying for his PhD in quantum optics at the University of Innsbruck, Austria. Check out his answer, beautifully illustrated in an animated film, perfect for 11-year-old children and 47-year-old adults alike, right below.

What’s worth mentioning is that Ames, now a physicist, was totally discouraged by science as a child, which seemed like a wall circling him, according to his own words. Ames was inclined towards the arts in high school, time during which he playing theater and ballet, but soon met his calling for sciences in college. It’s all about asking the right question and receiving the right answers. Science can be disturbing, challenging, even frightening when people get exposed to poorly explain science and overly complicated terms. This need to be tackled.

Nevertheless, we warmly invite you as well to join the contest, and submit your own reply. Entries for this year’s conundrum can be submitted until March 1, 2013. The winner will receive a trophy, a trip to the 2013 World Science Festival in NY and the satisfaction of educating not only sixth-graders, but the general public.