Stonehenge was actually the core of a huge spiritual centre

We tend to think of the Stonehenge as a lone giant, huge blocks of rock towering over the quiet British landscape. But as a new study has revealed, Stonehenge was likely a diverse and vibrant place, a complex of different religious and cultural settings.

Using geophysical techniques (mostly Ground Penetrating Radar – GPR – and magnetometry), scientists managed to get an unprecedented view of the underground surrounding Stonehenge. They’ve basically “sliced” the ground up to 4 meters deep, and located buried remains with unprecedented resolution. Most spectacularly, they discovered a 330-metre long line of more than 50 massive stones, buried under part of the bank of Britain’s largest pre-historic henge.

“Up till now, we had absolutely no idea that the stones were there,” said the co-director of the investigation Professor Vince Gaffney of Birmingham University.

The c-shaped enclosure – more than 330 metres wide and over 400 metres long – faced directly towards the River Avon, and even though the rocks are now horizontal, it seems likely that they were initially vertical, standing stones. But this fallen monument isn’t the only surprising thing they found. Archaeologists also report a 33 meter (108 feet)-long timber building dated at about 6,000 years old, likely used for rituals and spiritual practices. It’s possible that the timber building was there before Stonehenge was even built.

“[The building] has three rows of roof-bearing posts. It is around 300 square metres and slightly trapezoidal, which is interesting because in the same period on the continent, about 100 to 200 years earlier, we also find this type of trapezoidal building related to megaliths [giant stones],” noted Wolfgang Neubauer of the Ludwig Boltzmann Institute.

They also report several Neolithic and Bronze Age religious shrines between 10 and 30 meters ( 32 to 100 feet) in diameter and Bronze Age burial mounds as well as four Iron Age shrines or tombs, and a half dozen Bronze Age and Iron Age domestic or livestock enclosures.

It took four years of painstaking work and a lot of data integration, processing and analysis before we can finally say Stonehenge wasn’t a lonely desolate place.

“It shows that, in terms of temples and shrines, Stonehenge was far from being alone,” said Professor Gaffney.

Located 8 miles (13 km) north of Salisbury in England, Stonehenge represents the remains of a ring of standing stones set within earthworks. It is in the middle of the most dense complex of Neolithic and Bronze Age, dating anywhere from 3000 to 2000 BC. Radiocarbon dating in 2008 suggested that the first stones were raised between 2400 and 2200 BC, whilst another theory suggests that bluestones may have been raised at the site as early as 3000 BC – it’s still a matter of debate in the scientific community, but everyone agrees that the building process was lengthy and took place in several stages.

Stonehenge was used as a burial place. In, 2013 a team of archaeologists, led by Mike Parker Pearson, excavated more than 50,000 cremated bones of 63 individuals buried at Stonehenge. Now, more and more evidence is indicating that there is more to the Stonehenge area than previously believed.

There is little or no direct evidence for the construction techniques used by the Stonehenge builders. Over the years, various authors have suggested some conspiracy theories, claiming that supernatural or futuristic methods were used, usually asserting that the stones were impossible to move otherwise. However, that’s not true. It’s been demonstrated that conventional techniques and Neolithic technology as basic as shear legs can be effective at moving and placing rocks of that size and weight. 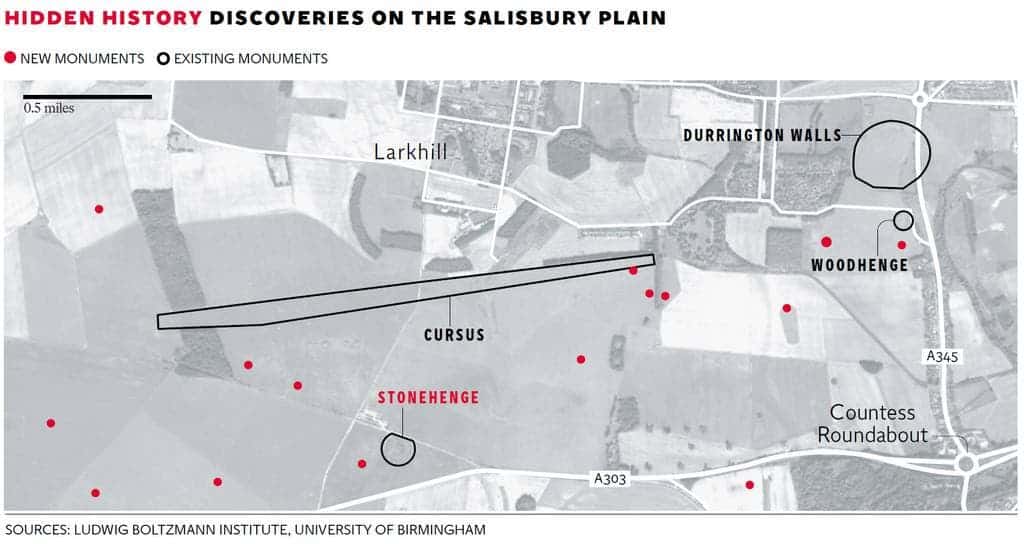 It may come as a surprise to most people, but in modern times, archaeological explorations have less to do with digging, and more to do with remote surveying technology – geophysics. In archaeology, geophysical survey is ground-based physical sensing techniques used for archaeological imaging or mapping. Remote sensing and marine surveys are also used in archaeology.

Basically, geophysical surveying creates underground maps of subsurface archaeological features; it measures a parameter of the underground (for example resistivity or magnetic susceptibility) and detects buried features when their physical properties contrast measurably with their surroundings. The most common methods are:

These three methods, as well as a 3D laser scanner was used for this study.

To me, it’s simply spectacular how very different branches of science can work together and achieve such spectacular results. Just think about it for a moment: without having to actually dig anything, we know that there is an intricate social, cultural and religious complex around the Stonehenge, and we know what kind of activities people did there. Isn’t that just mind blowing?