by Mihai Andrei
in Physics, Science
Reading Time: 3 mins read
A A
Share on FacebookShare on TwitterSubmit to Reddit

It looks like not all is going bad for Italian researchers, after the trial of the seismologists: physicists from Italy have discovered the first evidence of a nucleus that doesn’t exist in nature and survives only for 10-10 seconds when created in a laboratory.

Hypernuclei contain all sorts of protons and neutrons, but unlike regular nuclei, they also contain at least a hyperon, a particle that consists of three quarks, including at least one strange quark; hypernuclei are considered to be the core of strange matter that may exist in distant parts of the universe and could prove valuable to researchers in understanding this phenomena. Whoa! Wait a minute, strange matter? 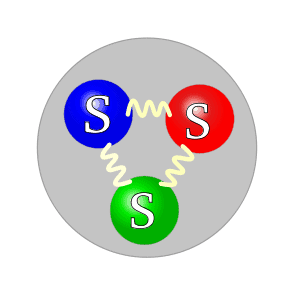 Let’s start from the beginning. You’ve probably learned in school that the world we see around us is built from ‘atoms’ – the building blocks of the Universe – which themselves consist of protons, neutrons and electrons. But scientists love to dig more and ask more questions, so they found other fundamental particles which build these particles. Among these smallest particles (that we know of at the moment, at least) are quarks, which go together and build neutrons and protons. Strange quarks are just a type of quarks, named so because, well, scientists have a sense of humor. Which gets us to our point: strange matter is a type of quark matter, usually thought of as a “liquid” of up, down, and strange quarks.

The particular hypernucleus analyzed here was called “hydrogen six Lambda” (6ΛH), and it was first predicted to exist in 1963. Now, researchers from the FINUDA experiment at the Istituto Nazionale di Fisica Nucleare – Laboratori Nazionali di Frascati (INFN-LNF) in Frascati, Italy have reported the first ever ‘sighting’ of such a phenomena, in a study published in the recent issue of Physical Review Letters.

As the name suggest, the atom is a species of Hydrogen which consists of six particles: four neutrons, one proton, and one Lambda (Λ) hyperon. Since the Hydrogen atom has only one proton and no neutrons, other species which do have neutrons are called ‘heavy hydrogen’, like deuterium (one neutron) and tritium (two neutrons). Since 6ΛH has four neutrons plus a L hyperon, physicists refer to it as “heavy hyperhydrogen.” The hyperon is practically a composite particle which contains one strange quark.

Without the L hyperon, it would practically be impossible to observe the Hydrogen atom with four neutrons, because it increases its lifetime from 10-22 seconds to 10-10 seconds.

The findings could shed light on strange matter, which many researchers believe to exist at the core of ultra-dense neutron stars. They can also serve as good tools to measure the current atomic model.

“The fact that a hypernucleus has a strange quark does give it interesting characteristics compared to normal nuclei, since it allows the component L particle to act as a probe that can go very deep into the nucleus to test the description that the single particle shell model gives of nuclear matter,” Botta said. “In this respect, the study of hypernuclear physics allows us to get information not directly accessible otherwise.”