I will take the risk of being quite subjective: the trial against the Italian seismologists just got a lot more absurd. Six seismologists and one government official are charged with manslaughter after telling the public there is no major risk of an earthquake, right before the deadly temblor in 2009. Yesterday, the much anticipated and feared hearing took place, and a Californian expert took the stand, heavily criticizing the Italian experts.

All those indicted took part in a meeting held in L’Aquila on 30 March 2009, during which they were asked to assess the risk of a significant earthquake in the area, in view of the many shocks that had occurred recently. After the meeting, Bernardo De Bernardinis, deputy head of the Department of Civil Protection, declared:

“The scientific community tells me there is no danger because there is an ongoing discharge of energy,” a statement that most seismologists consider to be scientifically incorrect.

Just a week after that, a 6.3 earthquake struck L’Aquila, killed 309 people, and De Bernarnidis, as well as the experts who advised him, were charged with manslaughter. Now, seismology is a frontier science; we cannot, at the moment, predict earthquake nor fully understand the information we extract from earthquakes. We can speak in terms of probability and energy, and more often than not, there is no clear line between right and wrong. Arguably, the Italian team made a mistake – you could even say it was a big mistake. But if you ask me, it is totally unfair to trial somebody for being scientifically wrong in seismology, particularly in the light of new developments in the case:

Guido Bertolaso, who was at the time De Bernardinis’s direct superior was revealed to have set up the meeting to convey a reassuring message, regardless of the scientists’ opinion, and he also turned out to be the direct source of the ‘energy discharge’ statement. This changed his status from key witness to defendant, and tried to defend himself. He explained that the meeting was a ‘media move’, not with the purpose of underestimating the risks, but rather putting some order in the chaotic reports storming from the media. He was especially referring to Giampaolo Giuliani — a laboratory technician and amateur seismologist who was alarming the population, warning of a big earthquake to come. 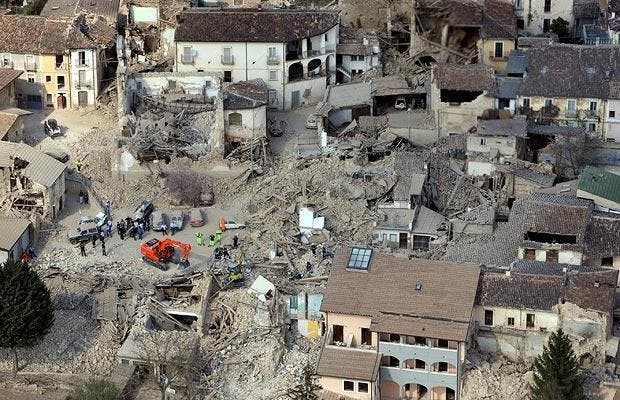 The thing is, in some situations, smaller tremors (like the ones in Italy) can release energy and thus eliminate the risk of a ‘big one’, but in other cases they are only a warning of worse things to come. Bertolaso claimed he heard the first possibility from the Italian National Institute for Geophysics and Volcanology (INGV) and he used it publicly, without being corrected by any seismology experts. Enzo Boschi, former INGV president and one of the defendants has denied this, but he has yet to take the stand and explain himself.

Things took a turn for the worse when Lalliana Mualchin, former chief seismologist for the Department of Transportation in California, came in to testify as an expert for the prosecution. He is one of the few seismologists in the world to openly criticize the Italian team, and refused to sign the letter supporting the indicted seismologists signed by about 5,000 international scientists. Mualchin claims the seismic hazards weren’t properly estimated in L’Aquila:

“Italy is one of the countries with the best seismic knowledge in the world. And yet look at what a 6.3 earthquake has done to this city. That knowledge was not used, and scientists are responsible for that. They were conscious of the high risk in the area, and yet did not advise the people to take any precaution whatsoever”, he said.

The problem is indeed a scientific one, and a tough one to crack as well. The Italian scientists relied on a method called the probabilistic seismic-hazard analysis (PSHA), a method that analyzes the frequency of the earthquakes in an area to estimate probabilities of future temblors. The method is used in many countries and is considered by most to be state of the art, but in Mualchin’s view, this method systematically underestimates seismic hazards because it doesn’t take into consideration very rare and extreme events.

“Frequency is not important, what really matters is the largest earthquake we can expect, the strongest one that has happened in the past. Risk prevention should be based on that,” he said.

This is the philosophy behind deterministic seismic-hazard analysis, a method which Mualchin claims has wrongfully been abandoned by the scientific community, up to the point where younger seismologists haven’t heard about it. Having worked in seismology myself, I can confirm this – I’ve only rarely come across this method, and when I have, it was rather mentioned than explained.

“PSHA is a bad model California has exported elsewhere, and we see the results here in L’Aquila,” he told Nature after the hearing. Mualchin worries that the new building codes approved in Italy after the L’Aquila earthquake show no improvement. “They never consider the worst-case scenario for any particular area, and this can lead to new disasters in the future”.

The case continues, and Mualhin may be right. The US might have wrongfully exported this model instead of a better one, and the Italians may have made a big scientific mistake. But when working on the frontier of human knowledge, being charged for manslaughter for being wrong is just unacceptable; there is no clear method, no obvious direct way for estimating earthquake likeliness, and as much as the Italians want to point the finger at someone and find people to blame, in my humble opinion, they should just accept the fact that this is where we are, scientifically, at the moment.