We see light every day, and yet, we don't truly understand it; it's either a particle or a wave, or both at the same time... and we don't really know why. Now, for the first time, researchers have captured an image of light behaving as a particle and a wave at the same time.

We see light every day, and yet, we don’t truly understand it; it’s either a particle or a wave, or both at the same time… and we don’t really know why. Now, for the first time, researchers have captured an image of light behaving as a particle and a wave at the same time.

Christian Huygens, who was a contemporary of Isaac Newton, suggested that light travels in waves. Isaac Newton, however, thought that light was composed of particles that were too small to detect individually. Strangely enough.. they were both right. In 1801 a physicist in England, Thomas Young, performed experiments which revealed that light is a wave. In the 1890s, Maxwell’s equations described light behavior in such an elegant way that many scientists thought not much was left to say about it.

Then, on Dec. 14, 1900, Max Planck came along and introduced a stunningly simple, yet strangely unsettling, concept: that light must carry energy in discrete, specific quantities. Before you know it, the particle nature came back with a vengeance; to make things even more interesting, Louis De Broglie demonstrated that every physical object actually has wave properties – in a way, everything is both a wave and matter at the same time. This is called the wave-particle duality.

“It seems as though we must use sometimes the one theory and sometimes the other, while at times we may use either. We are faced with a new kind of difficulty. We have two contradictory pictures of reality; separately neither of them fully explains the phenomena of light, but together they do”.

This seems to be most intriguing in the case of light – it seems that light behaves selectively depending on the environmental constraints. Sometimes it’s a wave, sometimes it’s a particle… and sometimes it’s both. Scientists have only ever been able to capture an image of light as either a particle or a wave, and never both at the same time… until now. 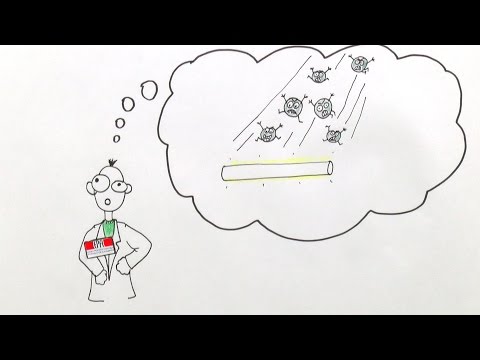 The key to this success lies in the unusual experimental design. The team from the École Polytechnique Fédérale de Lausanne in Switzerland have managed to use electrons to image light by firing a pulse of laser light at a single strand of nanowire suspended on a piece of graphene film. This caused the nanowire to vibrate, and in turn, to send light particles (photons) along two possible directions. When light particles that are travelling on opposite directions meet and overlap on the wire, they form a wave. Known as a ‘standing wave’, this state creates light that radiates around the nanowire.

That’s a pretty creative setup in its own right, but it’s not gonna give you a wave-particle image, so they needed to take it one step further. They sent a stream of electrons into the area nearby the nanowire, forcing an interaction between the electrons and the light that had been confined on the nanowire. This caused the electrons to either speed up or slow down; using an ultrafast electron,  they could visualise the standing wave, “which acts as a fingerprint of the wave-nature of light,” the press release explains. So they were able to capture as  a wave (its fingerprint actually; at the top of the image) and as photons (in the bottom of the image).

“This experiment demonstrates that, for the first time ever, we can film quantum mechanics – and its paradoxical nature – directly,” one of the team, physicist  Fabrizio Carbone, said in a press release. “Being able to image and control quantum phenomena at the nanometer scale like this opens up a new route towards quantum computing.”

The team in Switzerland also put together the adorable video above, explaining their experiment.