Defect in graphene opens up even more possibilities

by Mihai Andrei
in Physics, Studies
Reading Time: 2 mins read
A A
Share on FacebookShare on TwitterSubmit to Reddit

Graphene is probably the ‘substance of the century’, and it will probably be for us what plastics were in the 1900s. Now, a flower-like defect in the material that can occur during the fabrication process could have a significant effect on graphene’s already impressive mechanical, magnetic, and electrical properties. 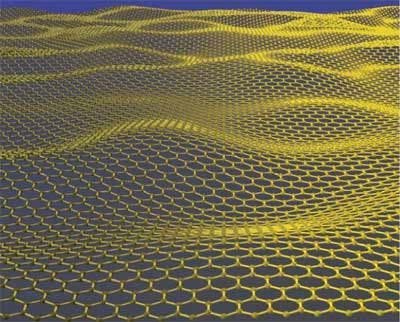 Graphene is practically a one atom thick layer of carbon atoms, densely packed in a hexagonal (honey comb) lattice. The carbon-carbon bond length in graphene is about 0.142 nanometers. It is already known that it has unbelievable strength and conductivity, both of which are a result of its structure.

Graphene differs from conventional 3D materials in that it is a semi-metal or zero-gap semiconductor. It has a remarkable electron mobility at room temperature and it has been showed that electrical current going through it can magnetize it.

A team of researchers from the National Institute of Standards and Technology (NIST) and Georgia Tech described for the first time a class of seven defects that can occur during its fabrication. Basically, these defects appear as a result of the movement of the carbon atoms at high temperatures when producing graphene by heating silicon carbide under ultrahigh vacuum. The rearrangements which require the least energy from graphene are switching from six-member carbon rings to rings containing five or seven atoms, which keeps all the carbon atoms happy with no unsatisfied bonds. However, these changes create a new type of defect or grain boundary loop in the honeycomb lattice. According to researchers, the fabrication process plays a huge role in this structural malfunction.

“As the graphene forms under high heat, sections of the lattice can come loose and rotate,” says NIST researcher Eric Cockayne . “As the graphene cools, these rotated sections link back up with the lattice, but in an irregular way. It’s almost as if patches of the graphene were cut out with scissors, turned clockwise, and made to fit back into the same place, only it really doesn’t fit, which is why we get these flowers.”

The incredibly lattice is already stronger than steel, but it is also extremely rigit; these (technically speaking) defects might do it a world of good, giving it much needed flexibility, thus making it even more resistant to fractures or tears. Further research will provide some new insight as to how these flower-like structures can be eliminated or created at will, depending on the needs. Furthermore, these seven new structures would each have different not only mechanical, but also electrical and magnetic properties. All hail graphene !