by Mihai Andrei
in Archaeology, Physics
Reading Time: 2 mins read
A A
Share on FacebookShare on TwitterSubmit to Reddit

This ancient Egyptian trinket may not look like much, but it hides a very interesting story. Researchers have found that the 5,000-year-old iron bead is actually made from a meteorite. 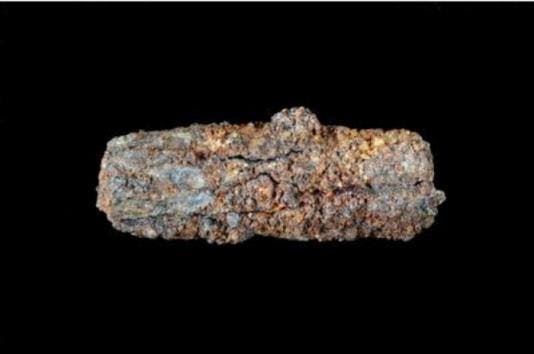 Archaeologists have found iron objects in ancient Egypt, dating them to 2-3 millennia BC. But the earliest evidence of smelting only appeared much later after that, so how could they obtain these objects?

The result, published on 20 May in Meteoritics & Planetary Science, not only details this spectacular object, but also explains how ancient Egyptians obtained iron millennia before the earliest evidence of iron smelting in the region, solving the long standing archaeological mystery. It could also suggest (though that’s still debatable) that they regarded meteorites highly as they developed their religion.

“The sky was very important to the ancient Egyptians,” says Joyce Tyldesley, an Egyptologist at the University of Manchester, UK, and a co-author of the paper. “Something that falls from the sky is going to be considered as a gift from the gods.”

Using microscopy and computed tomography, Diane Johnson, a meteorite scientist at the Open University in Milton Keynes, UK, and her colleagues analyzed the object. Microscopy alone showed that it has a content in nickel of over 30%, which alone suggests that it came from a meteorite. acking up this result, the team observed that the metal had a distinctive crystalline structure called a Widmanstätten pattern. Widmanstätten patterns, also called Thomson structures, are unique figures of long nickel-iron crystals found only in meteorites.

But they took things one step further – using computed tomography (CT scan), they found that the object was created by hammering a fragment of iron from the meteorite into a thin plate, then bending it into a tube. They then re-created a 3D model of the object.

So what does this mean for the entire Egyptian culture? The object is dated 3,300 BC, and the first signs of smelting occur almost 3 millennia after, in 600 BC. It is known that back then, iron was associated with royalty and even dinivity. So where do meteorites stand? Some archaeologists believe Egyptians thought of them as fragments from the gods, descending from the sky as gifts. But was this technique common, or was it nothing more than an accident?

Johnson says that she would love to check other iron artefacts, but it remains to be seen if museums will actually allow her to do so – hopefully, they will.