by Mihai Andrei
in Geology, Space
Reading Time: 1 min read
A A
Share on FacebookShare on TwitterSubmit to Reddit

Well if we can’t go to Mars, it seems Mars is coming to us… at least some chunks of it. Scientists have reported a rather unusual invasion by Martians: meteorite-like chunks that fell from the Red Planet in Morocco last summer. 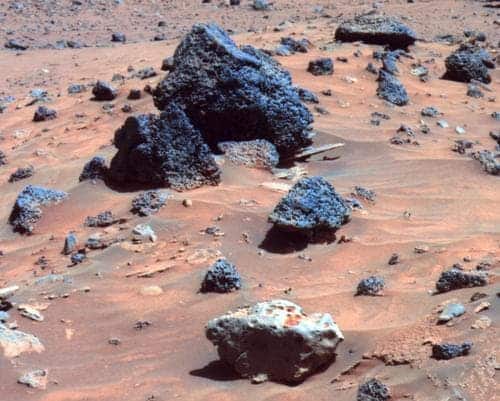 This is the first time since 1962 that researchers have confirmed such a sample, and only the fifth time ever, so this is really a big deal, especially as it could provide valuable information about our planetary neighbor, with virtually no costs whatsoever.

The results were confirmed by a special committee of experts, which declared that almost 7 kilograms of Martian rock indeed fell in Morocco. The biggest rock weighs about 1 kilo.

Astronomers believe that this happened because a few million years ago, Mars suffered a big collision with some other object, and that small fragments are still drifting about since then, and occasionally fall on the surface of Earth. We’ll keep up with the details as they develop, but this kind of research usually takes quite a lot of time. However, it’s extremely pleasant and lucky for such an event to occur.