by Mihai Andrei
in Physics, Renewable Energy
Reading Time: 3 mins read
A A 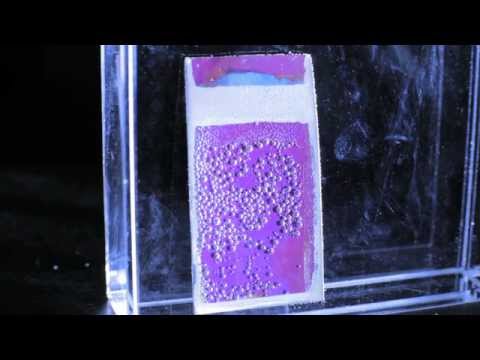 An artificial leaf has to produce a storable fuel, such as hydrogen, instead of electricity for immediate use; the fuel could then be used in another mechanism to generate electricity. This latest paper was published in PNAS by associate professor of mechanical engineering Tonio Buonassisi, former MIT professor Daniel Nocera (now at Harvard University), MIT postdoc Mark Winkler (now at IBM) and former MIT graduate student Casandra Cox (now at Harvard).

“We don’t always get it right,” Buonassisi says, but such an analysis “lays a roadmap for development and identifies a few ‘levers’ that can be worked on.”

Their work discusses two technologies: a standard silicon solar cell, which converts sunlight into electricity, and chemical catalysts applied to each side of the cell. The goal is to make something cost-effective that could be built from cheap materials but is also efficient – because after all, this is a technology that has to be applied large scale to work.

“What’s significant is that this paper really describes all this technology that is known, and what to expect if we put it all together,” Cox says. “It points out all the challenges, and then you can experimentally address each challenge separately.”

“We were surprised, actually,” Winkler says: Conventional wisdom held that the characteristics of silicon solar cells would severely limit their effectiveness in splitting water, but that turned out not to be the case. “You’ve just got to question the conventional wisdom sometimes,” he says.

They key to obtaining high solar-to-fuel efficiencies is to combine the right solar cells with a catalyst – and the first thing you have to know in order to do this is what you shouldn’t do. You can then take the individual components that work effectively on their own, and see which ones would also work together. The voltage produced by a standard silicon solar cell, about 0.7 volts, is insufficient to power the water-splitting reaction – which requires at least 1.2 volts. A solution would be to pair multiple solar cells in series – while you would lose some energy between cells, this would be acceptable.

Another problem they have tried to solve is that of the water itself. In order to complete the electrical circuit, the current must pass through a significant distance in water, which has resistance to electrons.

“In our simulations, we have a framework to determine the limits of efficiency” that are possible with such a system, Buonassisi says. For a system based on conventional silicon solar cells, he says, that limit is about 16 percent; for gallium arsenide cells, a widely touted alternative, the limit rises to 18 percent.

The next step is to put all these models and theoretical improvements into practice:

“It is very important to construct a working system which has a large surface area and operates with solar energy under open field conditions for a long period of time, as is done with the testing of solar cells.” If this can be achieved, he says, “the construction of robust and efficient solar-driven modules which produce hydrogen from water on a large industrial scale would have considerable impact on human society.”, Barber concludes.