Artwork from waaaay before Photoshop.

A painted rock shows that humans tried their hand at symbolism as early as 73,000 years ago, pointing to the roots of modern cognition patterns.

International researchers report discovering the oldest evidence of abstract drawing to date. The artifact in question is a fragment of polished rock painted with a crosshatch pattern of nine fine lines, unearthed from a 73,000-year-old archaeological stratum at the Blombos Cave in South Africa.

“Do you do portraits, too?”

It’s not easy determining symbolism from art when dealing with some of the earliest graphic productions humanity has ever created. The main difficulty lies in determining whether the splotches of pigment were applied deliberately or not. After intentionality is established, the next step is to determine whether the images you’re dealing with are doodles or storytelling crutches, or whether they held particular meaning.

Needless to say, across the huge divides of time and culture that separate us from our ancestors, both points can be very tricky to handle.

The oldest known sample of art we’ve found before now is the shell of a freshwater mussel engraved with a zigzag pattern discovered in Tirnil, Java, in a 540,000-year-old archaeological layer. Decorated trinkets discovered in several archeological sites in Africa, likely used for personal adornment, have been dated to roughly 70,000 years ago.

Still, art does not necessarily a symbol make. A symbol is a mark, sign, or word that represents an idea, another object, or a relationship. While the main trait of art is beauty or its ability to encapsulate an emotional message, a symbol is, foremost, an abstraction. As such, accurately telling apart art and symbolism is very important for anthropology. Both art and symbols “are a prime indicator of modern cognition and behavior”, the team writes — the latter especially so, since abstraction requires that extra bit of intellectual brawn to handle.

Well, we have new evidence pointing to the roots of abstract thinking at least 30,000 years earlier than previously discovered works suggested.

The artifact, detailed by an international team that includes scientists from Norway, France, South Africa, and Switzerland, is a fragment of siliceous rock (silcrete) adorned with nine fine lines in a crosshatch pattern. It was found during excavations at the Blombos Cave, South Africa, in a 73,000-year-old archeological stratum. According to the team, the lines were drawn using an ocher (the iron ore from which the eponymous color is derived) pencil.

Determining whether the pattern was deliberately drawn fell primarily on the shoulders of the team’s French members, who have a background in the chemical analysis of pigments.

They started by trying to reproduce the lines through various techniques — an approach known as experimental or experiential archeology, as it relies on direct experience gained from experimentation — that were available to the people living around the cave at the time. These included whittling ocher fragments to a point or an edge to see which shape better recreates the lines, as well as applying watery solutions of ocher powder using brushes. 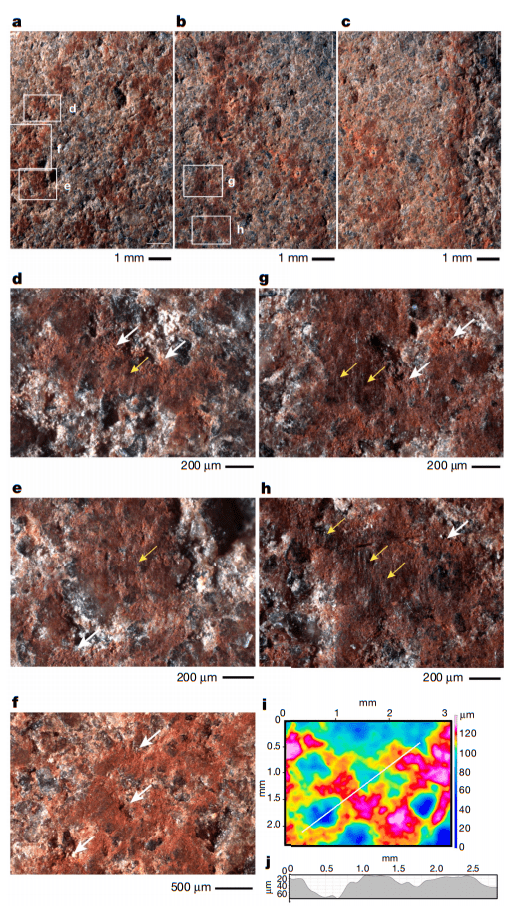 They then compared the lines against their ancient counterparts from a microscopic, chemical, and tribological (the science of friction and wear) standpoint. According to the team, the lines were intentionally drawn with a pointed ocher implement (akin to a pencil). As such, the pattern represents the earliest known abstract drawing to date.

With intentionality established, the next step was to decide whether the team was looking at a symbol or just pretty doodles. This step was surprisingly simple, however. Blombos Cave is the site of an ongoing excavation by teams from the University of Bergen (Norway) and the University of Witwatersrand (South Africa) that began in 1991. Over the years, many other objects with symbolic markings — including ocher fragments that feature very similar crosshatched engraving — were uncovered in the same archaeological stratum in which the present artwork was discovered.

The team writes that by using various techniques to produce similar patterns on different materials suggests that the marks serve a symbolic function.

The paper “An abstract drawing from the 73,000-year-old levels at Blombos Cave, South Africa” has been published in the journal Nature.