Ever dreamt of being a medieval castle builder? You’ll love Château de Guédelon

It's being build today using only tech and know-how from the 13th century. Loads of fun!

In the heart of France, one stretch of land is still living in the 13th century. Nestled in the forests of northern Burgundy, a small army of quarrymen, stonemasons, woodcutters, carpenters, blacksmiths, tile makers, carters, and rope makers are working together to build Château de Guédelon — the world’s newest medieval castle. 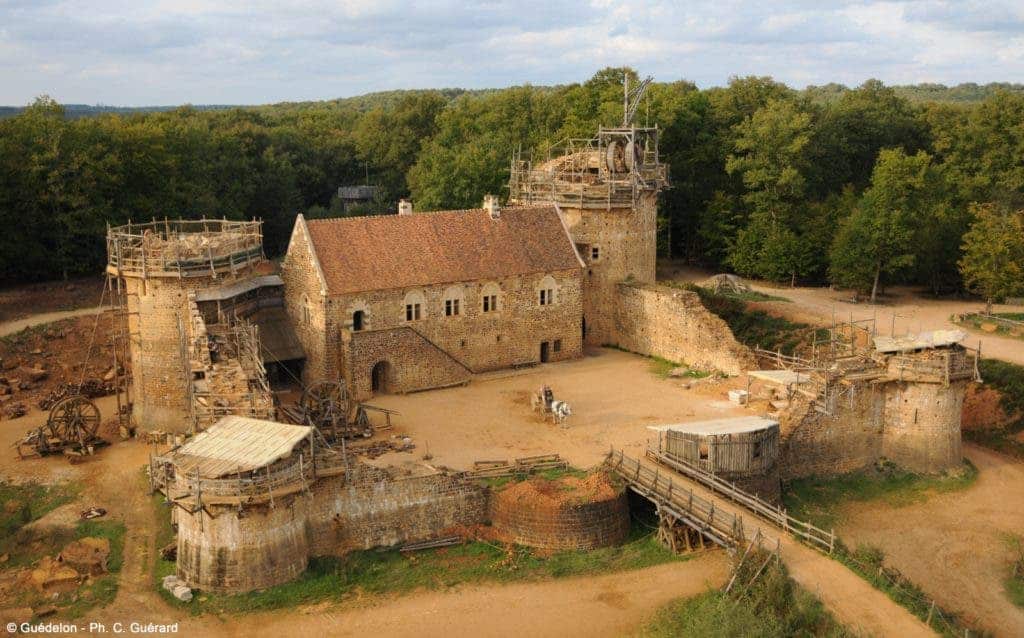 Château de Guédelon is the product of the latter approach but taken to a whole new scale. The brainchild of Michel Guyot (owner and restorer of Saint-Fargeau Castle) and Maryline Martin, the project aims to build a 13th-century castle using only materials and technology available at the time. It debuted in 1997 and today attracts more than 300,000 visitors every year.

“The idea of building a castle from scratch was born at Saint-Fargeau castle. Nicolas Faucherre, fortification expert, and Christian Corvisier, castellologist, presented Michel Guyot, the castle-owner, with the results of their study of Saint-Fargeau castle,” the project’s website reads.

“The results were astonishing: hidden within the red-brick walls were the stone walls of a medieval castle. On the report’s last page was a drawing of the castle as it once was and the final paragraph ended with the words, ‘Reconstructing Saint-Fargeau castle would be an amazing project’.”

“It was this closing sentence which caught Michel Guyot’s attention.”

Instead of simply rebuilding Saint-Fargeau, which would have been a “slavish reconstruction of an existing building,” Guyot, Martin, and their team of enthusiasts decided to design and build a new castle from scratch. They settled on the first half of the 13th century as a period of reference, and used a site nearby a stone quarry, an oak forest, and a water supply that could be used in the build. Then, then looked to neighboring castles in the area for architectural inspiration. 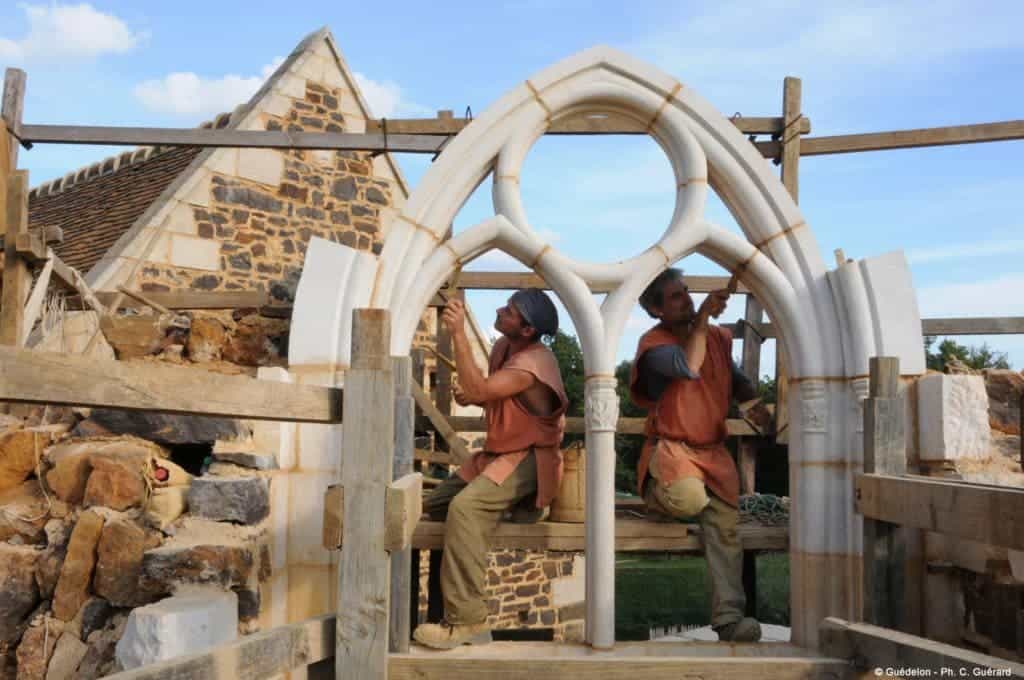 If building a castle sounds like a lot of fun, that’s because it is. It’s also a unique opportunity for historians and archaeologists to see how castles of the period were put together, however, so the project is getting a lot of attention from academia. The crew makes sure everything is as true to history as possible, and observing the construction efforts patches our (sometimes still rickety) understanding of medieval fortification building.

The site is overseen by Florian Renucci, the ‘master-mason’ responsible for the day-to-day activities at the castle. Along with the project’s managers, he helps ensure the work carried out is as historically, architecturally, and archaeologically accurate as possible. 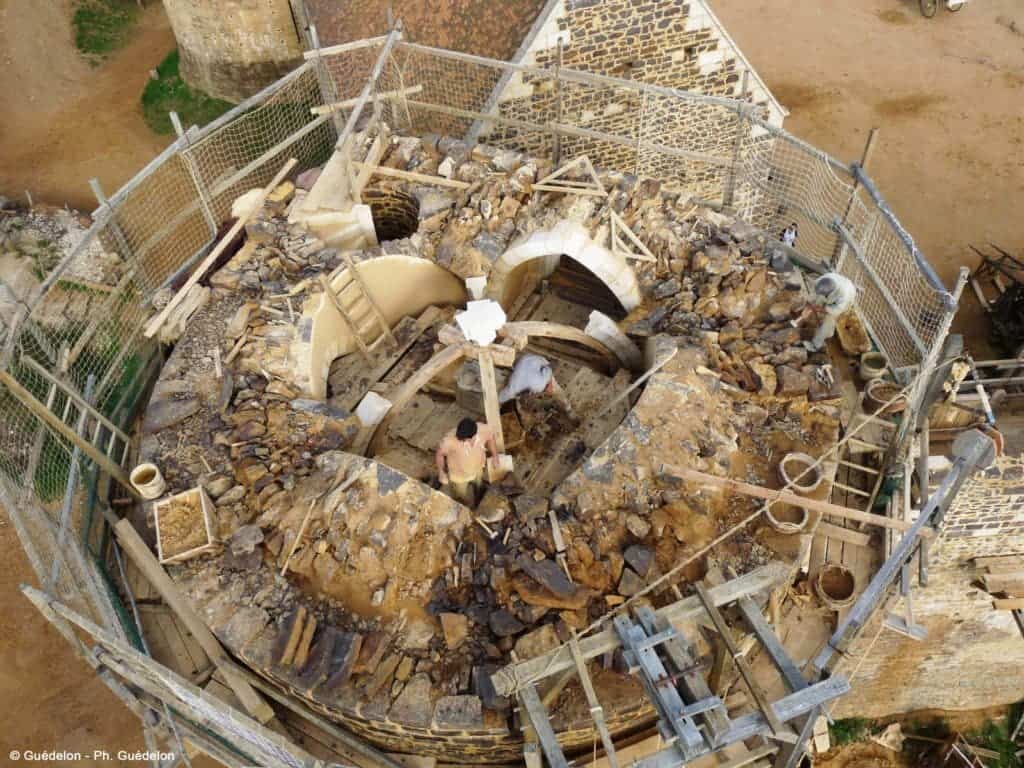 Guédelon currently employs 70 people, 35 of whom work directly in construction. Some of them developed the skills they use on-site, and all involved are more than happy to talk about their craft to visitors. Those who wish to delve deeper into these skills are welcome to stay and pitch in a few days’ work; each year, around 650 people from a wide range of backgrounds — from history buffs to engineering students — take on the mantle of a medieval builder at the site.

And the team really stand by their creed for historical authenticity, so much that they’ve crafted a period-accurate backstory for the project, to help guide the design and construction works. According to this backstory, work on the castle began in 1228, and it’s currently the year 1248 (the 20th year of consecutive work).

“The rule is that only what we know from documents that existed at the time is allowed,” says Sarah Preston, the project’s International Press Officer.

Their quest for historical authenticity has seeped into the very rocks that make up the castle’s foundation. Preston recalls how, although the workers were relying on 13th-century tools, know-how, and materials, Guédelon just didn’t feel right. They decided to fix this by fabricating an ‘owner’ for the castle named Seigneur Guilbert, a middle-ranking feudal lord who was granted the right to build his fortification after maintaining his fealty to the crown during a rebellion in 1226.

“Funnily enough, we found that even though we knew we were being accurate, somehow the castle lacked soul,” she added.

“At one point we realized the stonemasons were cutting the stones for the towers too perfectly, which just wouldn’t have been appropriate. It would have suggested he had a lot of money and therefore a small army in the chateau, which wasn’t the case.”

“So we invented a character – the owner – who would have likes and dislikes, wanting this and not wanting that.”

Just like any other respectable castle, Guédelon has a host of support-buildings on-site, including a working replica of a medieval hydraulic flour mill. It’s the result of a three-year collaboration with experts from the French National Institute for Preventive Archaeological Research, and its design is based on the remains of the 12th-century water mill found in the nearby town of Thevray. Buildings such as the mill help preserve the skills and practices of medieval craft, and give the visitors a chance to experience them in person — Guédelon’s baker, for example, always has some bread on hand for those wanting a taste.

In these 20 years of building, Guédelon Castle has become an important tourist attraction in France. Last year, it saw some 300.000 visitors, 50.000 of whom were school children. It’s currently completely self-financed, and goes to show how exciting and incredibly cool archaeology can be.