Oceans are running out of fish – much faster than we thought

The global fish stocks are depleting at alarming rates, much faster than reported by the UN, a study found.

by Mihai Andrei
in Animals, News, Oceanography
A A

The global fish stocks are depleting at alarming rates, much faster than reported by the UN, a study found. The discrepancy comes from the huge illegal industrial fishing that’s taking place around the world and artisanal catches. 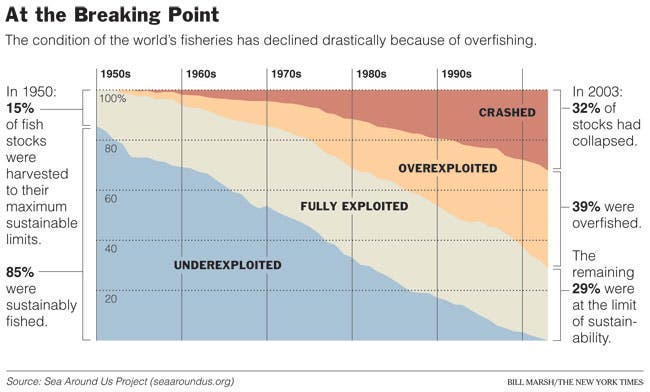 Despite becoming more efficient and being heavily subsidized, many fishing fleets are reporting lower and lower yields- and this is happening for a simple reason. The ocean is running out of fish.

“This decline in reconstructed catches reflects declines in industrial catches and to a smaller extent declining discards, despite industrial fishing having expanded from industrialized countries to the waters of developing countries,” the study writes.

Professor Daniel Pauly of the University of British Columbia who led the study said our market choice of fish will start to reduce at first (this is already happening in some places), and ultimately, stocks will collapse.

“The oceans are in big trouble”, Pauly said in an interview. “If we don’t start to reduce overfishing now, it’s going to be much harder to let the fish stocks grow back to a decent size. The stocks need to grow so they can sustainably yield the amounts we need to feed a population that’s growing by a billion people a decade, and at prices that people can afford.”

He also warned that fleets from more developed countries (especially Europe, China and Japan) illegally fish in the waters of poorer countries, and that greatly contributes to this problem.

“The catch is going down by 2% a year, but it looks more stable than it is”, Pauly explained. “What they do is deplete one stock and then move onto another, which means they’re going to run out of fish in a few decades.”

In the waters around West Africa for example, industrial fishing has all but wiped out traditional fishing. The local fishermen depend on fish for subsistence. Dyhia Belhabib, the lead researcher for West Africa, discovered that only 40% of the industrial catch was being reported to the FAO. For the Chinese fleets, an eye-popping of 92% fishing goes unreported.

The bad thing about it is that in the end everyone will lose. Fish stocks have already gone down massively, fleets will have lower and lower yields, fish will become more expensive and ultimately, the market will probably collapse with the fish stocks.

The authors of the study discuss not only the problems, but how we could solve them. The first thing to do, they say, is stop subsidies. Spending $20 billion a year for an industry to build pressure on an over-used resource doesn’t seem like a very good idea. It gets even worse when you consider that most of the money goes to the largest and most well-connected ships.

“The global fish catch is worth about $80 billion, so $20 billion is 25% of their income”, explained Rashid Sumaila, a fisheries economist at UBC. “That means that any fishing company that doesn’t make a 25% profit is going to go out of business” if these subsidies end.

Also, eliminating subsidies won’t even matter for the end buyer. In other words, the price of fish will largely remain the same.

“Small-scale fisheries get hardly any subsidies and still produce competitive fish”, Pauly added. “There is not much of a relationship between subsidies and the price of fish.”

But it’s not just the high end that we can work on. We can all play our part and help decrease fish consumption. Eating fish only once a week is a good step, and we should also avoid eating predatory fish. The higher up the food chain they are, the rarer we should eat them. Here’s a good TED Talk that discusses that: