Tesla Roadster and Starman have now traveled beyond Mars

The Tesla electric car has exceeded its warranty mileage more than 10,000 times.

In February this year, SpaceX tested its new Falcon Heavy rocket by launching some very unconventional cargo in space. The eccentric billionaire and SpaceX founder, Elon Musk, wanted to do things differently — so the payload was comprised of a Tesla Roadster, with a mannequin dressed in an astronaut suit sitting in the driver’s seat. Now, according to a SpaceX tweet, the car has made it past Mars’ orbit around the sun.

Starman’s current location. Next stop, the restaurant at the end of the universe. pic.twitter.com/Ty5m8IjJpE

In the eight months since it was launched into space, the ‘Starman’ mannequin has traveled over 370 million miles around the sun at an average speed of 35,000 mph. That’s quite the trek for a Tesla Roadster, which has exceeded its 36,000-mile warranty about 10,000 times. During its latest loop, Starman has even made it past Mars’ orbit, currently drifting 179 million miles away from Earth.

When a new rocket is tested, manufacturers typically send a dummy cargo into space — such as concrete or steel blocks. That was too boring for Elon Musk, though. In the process, SpaceX got the chance to test its spacesuit in real-world conditions while Musk secured great publicity for both of his companies in one move.

The successful test launch also marked the introduction of the world’s most powerful rocket currently in operation. 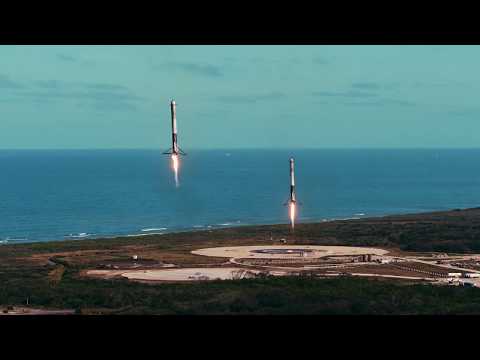 The Falcon Heavy is essentially made up of three Falcon 9s strapped together, which allows it to ferry roughly three times more payload into space than a single Falcon. Its design was first unveiled in 2011, but a series of setbacks have delayed the original launch plans.

The 224-feet-tall (68.4 meters) rocket is capable of delivering 54 metric tons (119,000 lb) of payload (satellites, cargo, astronauts etc.) into Earth’s low orbit, to the moon, or even to Mars. That’s the mass equivalent of a 737 jetliner loaded with passengers, crew, luggage, and fuel. It can even carry up to 4,000 kilograms of payload all the way to Pluto!

But Musk has his eyes set on an even more powerful behemoth, the BFR. According to Musk’s initial plan, the 348-foot-tall (106-meter) BFR system is powered by 42 Raptor engines. It should be capable of carrying up to 100 people in a pressurized passenger space that’s larger than that of an Airbus A380 airplane. BFR consists of a 190-foot (58-meter) tall booster for its first stage, and a 157-foot (48-meter) tall spaceship that also doubles as a second stage.

As for the Tesla and Starman, the pair should keep orbiting around the sun. Each time the car comes close to Earth, it will get a gravitational kick that will send it into a wider or narrower obit — but where to and for how long? Physicists at the University of Toronto Scarborough actually crunched the numbers finding that the Tesla Roadster will collide with Earth or Venus over the next million years with a probability of 6 percent and 2.5 percent, respectively. In all likelihood, however, the vehicle won’t make it that far.

According to Tom Narita, an astrophysicist at the College of the Holy Cross in Massachusetts, the Roadster could be obliterated by high-speed space dust and cosmic ray radiation. In only a couple of years, all the plastic and rubber in the car should get shredded into pieces by radiation while the metal structure itself can last for hundreds of thousands of years.