A supermoon, a blue moon, and a total lunar eclipse will coincide on the 31st of January. It’s the first time in 152 years

It's a stellar trifecta.

An extremely rare celestial coincidence is sending us over the moon. The January 31st supermoon will feature a total lunar eclipse, as well as a blue moon — and this almost never happens.

A Supermoon is a Moon that is full when it is also at or near its closest point in its orbit around Earth. Basically, the moon is closer to the Earth which to us, seems like it’s getting bigger. It can be hard to see the change with our own eyes, but the odds are you’re going to see it larger and clearer than usual.

“The supermoons are a great opportunity for people to start looking at the Moon, not just that once but every chance they have!” says Noah Petro, a research scientist from NASA’s Goddard Space Flight Center.

Since this supermoon will be the second full moon of the month, it also earns the title of a blue moon. But without a doubt, the cherry on the cake is the lunar eclipse. With a totality visible from western North America across the Pacific to Eastern Asia, the eclipse will still be partially visible from other parts of the world. Here’s an interactive map of where you can see the eclipse and in what stage.

If you can’t watch it for some reason or another, rest assured — the Virtual Telescope project provides a live stream of the supermoon’s eclipse over Rome’s skyline. 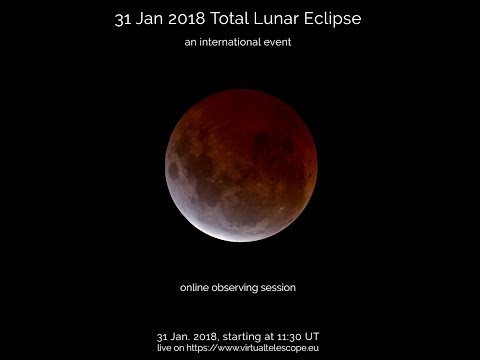 “The lunar eclipse on January 31 will be visible during moonset. Folks in the Eastern United States, where the eclipse will be partial, will have to get up in the morning to see it,” notes Petro. “But it’s another great chance to watch the Moon.”

The best time to see the supermoon is usually around moonrise. You can check your local moonrise time on this calendar. Meanwhile, the lunar eclipse will begin at 6:48am ET (11:48am UTC) and reach its maximum at 8:30am ET (1:30pm UTC). It could turn out to be a long night.

By your powers combined

It’s a rare event to have all these three events happen at the same time. The last time it happened was 152 years ago so if you do manage to spot it, make sure to take a photo or two. Bill Ingalls, NASA’s senior photographer and a fixture at NASA Headquarters has loads of good advice on how to shoot the event with a camera. If all you’ve got is a phone, you can still snap really good images. Be sure to set the focus exactly on the moon and increase the exposure slider to get the right balance.

Unlike the solar eclipse, the lunar eclipse isn’t dangerous to look at. You can look at it directly, without any glasses, without any worry whatsoever — except perhaps for a stiff neck.