During a blood moon, a brief flash of light caught astronomers' attention.

by Tibi Puiu
in News, Space
Reading Time: 3 mins read
A A

During a total lunar eclipse this past January, astronomers recorded the moment a small meteorite collided with the moon’s surface. This unique observation has now provided scientists with unprecedented information about what happens when cosmic objects impact the moon.

Earth’s atmosphere acts like a giant shield that shelters us not only from ultraviolet radiation that would otherwise roast our DNA but also destroys hunks of rock hurtling toward us. Although the moon has an atmosphere, technically called an exosphere, it’s so thin that gas molecules rarely collide with each other — and meteoroids pass through it like a hot knife through butter. The moon’s surface, which is dotted with countless craters, is a testament to what Earth could have looked like if we weren’t this privileged.

In the 1990s, researchers launched the Moon Impacts Detection and Analysis System (MIDAS) project that uses three astronomical observatories located in Spain: Sevilla, La Hita and La Sagra. By means of these telescopes and high-sensitivity CCD video cameras, researchers record the impact flashes of meteoroids on the moon in order to monitor the flux of interplanetary matter that impacts not only the moon but also our planet.

When meteoroids impact the moon they are completely destroyed but these collisions give rise to brief flashes that can be recorded. In a recent study, researchers at the Institute of Astrophysics of Andalusia in Spain performed an unprecedented observation of a lunar meteoroid: the first time that an impact flash is recorded during a lunar eclipse. The observation also marks the first time that a lunar impact flash was recorded in two wavelengths, which helped produce a higher-fidelity image of the impact.

A lunar eclipse occurs when the Moon passes directly behind Earth and into its shadow. This can occur only when the Sun, Earth, and Moon are exactly or very closely aligned (in syzygy), with Earth between the other two. Due to its reddish color, a totally eclipsed Moon is sometimes called a blood moon.

According to the new study, the impact recorded by MIDAS lasted only 0.28 seconds. The 30- to 60-cm-wide meteoroid weighed about 45 kilograms and impacted the moon at 61,000 km/hr, generating a 15-meter-across crater. The debris spewed by the collision was heated to 5,400 degrees Celsius, which is comparable to the surface of the sun. The video below shows the exact moment when the impact occurred. 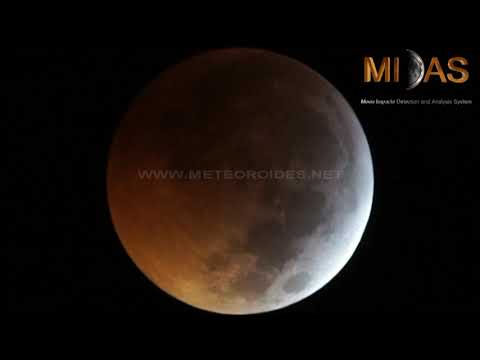 Reproducing these sorts of collisions in the lab is impossible which is why observations such as those performed by MIDAS are so important to science. And in the future, if humans ever colonize the moon, this sort of study will help us plan for the safety of the settlers.

The findings were reported in the Monthly Notices of the Royal Astronomical Society.