Over 20 hectares of Roman ruins discovered submerged off Tunisian coast

An unexpected archaeological finding confirms devastation at the hand of an ancient tsunami.

by Tibi Puiu
in History, News
Reading Time: 2 mins read
A A
Share on FacebookShare on TwitterSubmit to Reddit

On July 21, 365 AD the pearl-city of Alexandria, Egypt was devastated by a massive tsunami which was triggered by an earthquake off the coast of Greece. Though the ancients couldn’t measure earthquakes at the time, contemporary scientists estimated from the historical records that the largest of the two tremors had a magnitude of 8.0.

#Neapolis underwater ruins confirm a theory that the city of Neapolis was partly submerged by a tsunami in the 4th century AD. Photo: AFP pic.twitter.com/1YUqCzjL71

In Alexandria, approximately 5,000 people lost their lives and 50,000 homes were destroyed. Of course, the great port city was not alone with surrounding villages and towns suffering even worse damage. Some were wiped off the map. What’s more, the resulting tsunami traveled far and wide around the Mediterranian.

Now, we have evidence of just how far the tremor’s devastation traveled.

Discovery of underwater Roman ruins off Tunisia confirms city of Neapolis was partly submerged by tsunami in 365 AD https://t.co/5lO3EcQv3d pic.twitter.com/zXojmS2HtC

According to a Tunisian-Italian archaeological mission, the ancient Roman city of Neapolis located in northeastern Tunisia was also hit by the tsunami, confirming a long-held assumption. 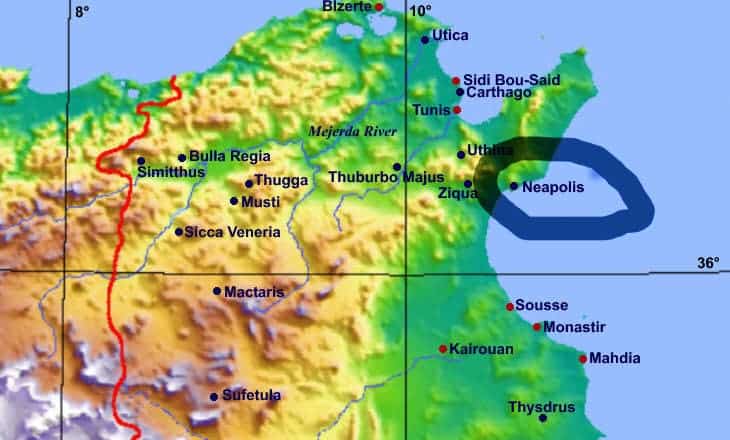 The archaeologists found over 20 hectares of Roman ruins submerged off the coast of the modern-day Tunisian town of Nabeul. Among the most interesting findings, the researchers reported streets, monuments, and at least 100 tanks used to produce garum.

Garum is fermented fish-based condiment which the Romans adored and imported from Neapolis.

“This discovery has allowed us to establish with certainty that Neapolis was a major centre for the manufacture of garum and salt fish, probably the largest centre in the Roman world,” Mounir Fantar, the head of a Tunisian-Italian archaeological mission told AFP.

“Probably the notables of Neapolis owed their fortune to garum.”

The expedition first started searching for Neapolis artifacts and ruins in 2010 but it was only recently that they struck gold. The fact that the Tunisian authorities thought very little of the historical value of Neapolis didn’t help at all, though. Nabuel is a popular tourist attraction and all sorts of buildings, particularly hotels, have popped up like mushrooms in the past decades. Some have been erected atop Neapolis ruins, much to the disdain of archaeologists.

Submerged for more than 2,000 years, this section was spared, revealing a rich history.