The great northern wall from Game of Thrones was directly inspired by Hadrian’s Wall — a massive defensive fortification in the Roman province of Britannia, today’s Great Britain. The wall defended the Roman province from the “northern barbarians.” Hadrian’s wall stretched from the east to the west of what is today northern England, was manned for much of its length, and barracks dotted it from place to place. Now, archaeologists have found one of these structures, a Roman cavalry barracks complete with weapons and personal belongings left behind by soldiers almost two thousand years ago.

But what’s really interesting about this find is not only that it represents a trove of ancient artifacts in pristine shape — but that the barracks actually predates the wall. The barracks dates from AD105, whereas work on the wall didn’t start until AD122.

“The native Britons took an opportunity, when the emperor Trajan died in AD117, to rebel,” says Andrew Birley, who heads the archaeological team. “The soldiers stationed in the north before the wall was built became involved in fighting and were very vulnerable. The evidence we have from this [find] shows the incredibly rich and diverse lifestyle these people had.” 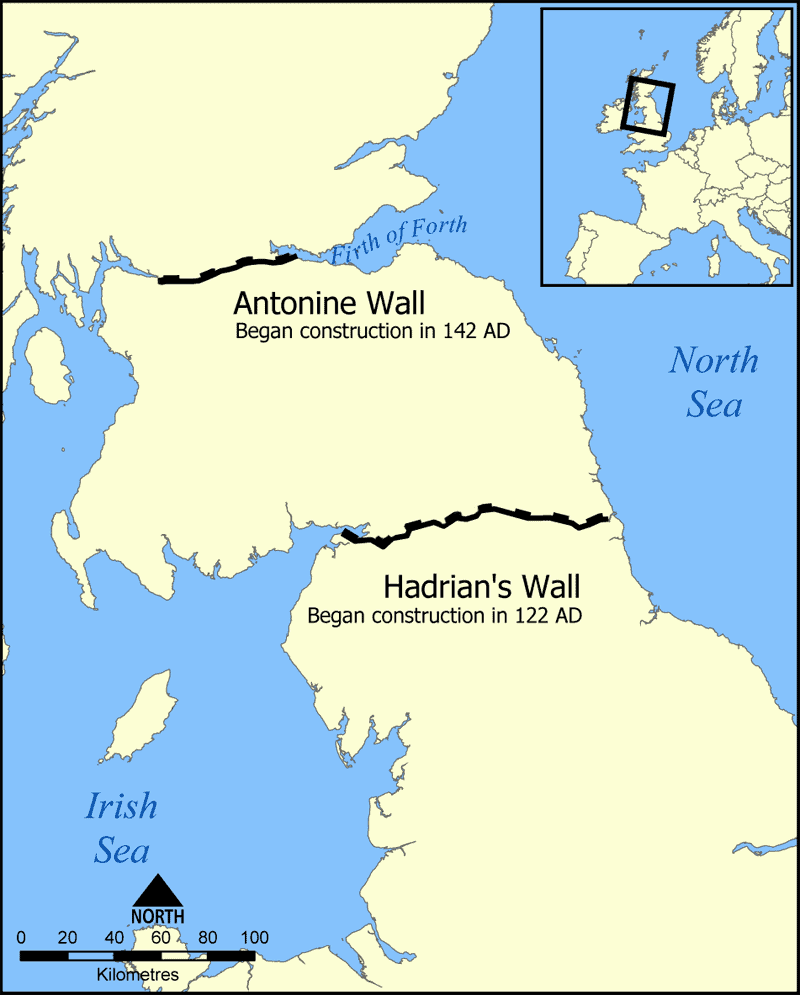 These rebellions provided the ultimate motivation for the wall, which became the largest Roman artifact anywhere, running a total of 73 miles.

Archaeologists found the site by chance and were stunned to see how well-preserved it was. They found an impressive number of weapons, including cavalry lances, arrowheads, and ballista bolts. The icing on the cake are two extremely rare cavalry swords, one of which is complete: its wooden scabbard, hilt, and pommel incredibly-well preserved. Archaeologists also found two wooden toy swords, one of which has a gemstone in its pommel.

These findings also pose some important questions — for starters, why would anyone leave something so valuable behind?

“Even for us, it’s very unusual to get things like complete Roman swords, sitting on the ground in their scabbards with their handles and their pommels. We were slightly dumbfounded by that. Then, to find another complete sword in another room next door only two metres away, two wooden swords and a host of other cavalry equipment, all in beautiful condition, is just terrific.”

“Archaeologists would never expect to find a Roman cavalry sword in any context, because it’s like a modern-day soldier leaving his barracks and dumping his rifle on the floor … This is a very expensive thing. So why leave [it] behind?”

There seems to be only one solid theory: the soldiers had to leave in a hurry. After all, this was a period of great strife, the border hadn’t yet been secured, and raids were frequent. If they moved out in such a hurry that they left behind gemstone swords, one can only imagine that there was some serious trouble coming their way.

“There was strife. This is the precursor to Hadrian coming to the UK to build his wall. This is the British rebellion. So you can imagine a scenario where the guys and girls at Vindolanda are told: ‘We need to leave in a hurry, just take what you can carry.’ If it’s your sword or your child, you grab the child.”

Also, it’s not just weapons. The team discovered all sorts of day-to-day objects like combs, brooches, and hairpins. Beautiful clothes have also been unearthed, with archaeologists now working to establish what kind of garments they were.

The barracks itself was discovered beneath the fourth-century stone fort of Vindolanda, in Northumberland. Archaeologists first learned of it after they lifted up a piece of concrete flooring from the 4th-century fortress. They were greeted by a pitch black, perfectly preserved anaerobic soil — a completely unexpected finding.

As they dug to 3.5 meters deep, they quickly identified timber walls and floors, eight rooms, stables, and accommodation with ovens for about 1,000 soldiers. It’s so well preserved that archaeologists have likened it to winning the lottery. Much of the pottery even has visible graffiti, which the researchers hope to use to identify the pots’ owners. Birley said:

“We have got successive barracks above them, some of which are also cavalry, but they’re much later and not preserved with anything like the range of material that has come from within the anaerobic conditions. What you’re seeing here is the full range of stuff, and all those little details that normally rot away completely.”