It's just as crazy as it sounds.

by Mihai Andrei
in News, Robotics
Reading Time: 2 mins read
A A

Eventually, Kevin Kit Parker wants to build a human heart. Somewhere along that process, he designed a soft robotic stingray made of rat heart muscle – and it’s just as crazy as it sounds.

Incorporating advances in engineering, biomechanics, histology and genetics is a veritable “tour de force” – and it’s almost certainly the way to go when attempting to build or fix human organs like the heart. The complexity of the task is enormous, and an interdisciplinary approach is vital. As strange as it sounds, this artificial stingray is a big steps towards that goal.

“One can imagine that one day we can use this technology to rebuild parts of the human body,” says Kedi Xu, a neural engineer at Zhejiang University in Hangzhou, China.

This whole idea started with a visit to the aquarium. Parker, an applied physicist at Harvard University, was fascinated by a jellyfish floating in the water. It reminded him of a beating heart, and he was curious to see if the could design a jellyfish-like pump. It almost sounds simple when they talk about it:

“Roughly speaking, we made this thing with a pinch of rat cardiac cells, a pinch of breast implant, and a pinch of gold. That pretty much sums it up, except for the genetic engineering,” says Kit Parker, the bio-engineer at Harvard who led the team that developed the strange robot. 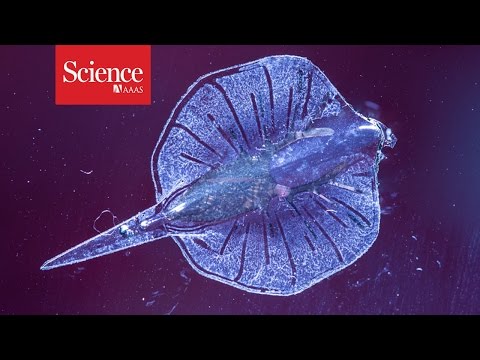 However, the truth is that none of it is simple. It took 4 years to create the thing, using 200,000 heart cells harvested from 2-day-old rat embryos and placed on top of the silicone to pump the entire structure. Getting this architecture right was also critical, and the uniqueness of the working material meant that the entire process is extremely delicate. Ultimately, the team managed to develop the robot and make it follow bright pulses of light, allowing it to smoothly twist and turn through obstacle courses.

“By using living cells they were able to build this robot in a way that you just couldn’t replicate with any other material,” says Adam Feinberg, a roboticist at Carnegie Mellon University who has worked with Parker’s team before, but was not involved in developing this new robot. “You shine a light, and it triggers the muscles to swim. You couldn’t replicate this movement with on-board electronics and actuators while keeping it lightweight and maneuverable. And it really is remote controlled, like a TV set.”

The material and the entire project is of course unconventional, but it’s this out-of-the-box approach that can benefit us greatly in the long run. For Parker, the satisfaction is double:

“Everyone is going to see something different” in it, he says. “I’m looking at it and I’m trying to understand the heart—and impress my 7-year-old daughter.”

The findings were published in Science.