Futuristic railgun tested by US Navy

The yellow and red flags were out; everybody was tense, waiting, and the gun range was clear. The a klaxon sounded. “System is enabled,” the voice on the speakerphone said. The people nearby could feel a slight shake in the floor. “Gun is fired,” the voice said. All this took place inside a huge cavernous building at the Naval Surface Warfare Center in Dahlgren, Va., on Friday.  The projectile left a huge trail of fire behind it, and it also left a whole room of researchers applauding. 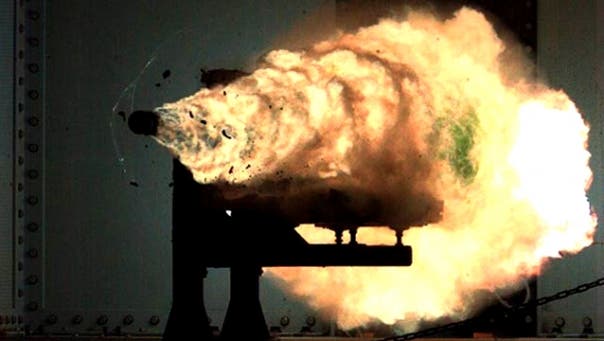 If you don’t know what a railgun is… well, you obvously haven’t played Quake. A railgun is a gun that is fired by an electrical charge rather than an explosion. Railguns use two rolling contacts that direct a huge electrical current through the projectile; the current then interacts with the magnetic fields generated by the rails to greatly accelerate it. In this case, they reached the speed seven times greater than the speed of sound.

It was the latest test in Naval railguns, a technology that promises to change Naval warfare forever, once it reaches a certain level. The US Navy hopes this will imbue ships with sci-fi like firepower, and according to their own statements, everything is going just fabulous.

“It’s a very important technology,” said Rear Adm. Nevin P. Carr Jr., chief of Naval Research, although “this is not a weapon that’s going to be here tomorrow.”