Meet Sawyer, the friendly robot that wants to disrupt manufacturing and education

Sawyer can do just about anything, even 'wink'.

by Tibi Puiu
in News, Robotics
A A

Rethink Robotics, a Boston-based company that’s made a name for itself by building ‘collaborative robots’ which can adapt to almost any manufacturing environment and task, is back with a new offering. Known as Sawyer, the new bot is a welcomed upgrade to Baxter which sold thousands of units since it launched in 2012 and shifted the stupid-but-precise robot paradigm in the manufacturing environment. But while small and large plants alike can make good use of Sawyer, Rethink Robotics says the friendly-faced robot will also impact education and research.

‘Look, I have eyes and brows. That means I won’t take your job!’

Traditional industrial robots have been around for decades and while their capacity to improve manufacturing yield is undeniable, they come with significant limitations. They are very expensive and only make sense in a high volume, low mix model of manufacturing, which is why manufacturers today only automate 10 percent of their task while humans perform the other 90 percent — no matter how repetitive or mundane they may be. Industrial robots, with their menacing Swiss knife-like arms, are also inflexible, require trained personnel supervision, and can be dangerous.

If you own a small plant that makes baskets or low volume electronics, it’s not feasible to buy a half a million dollar robot — but that’s not to say that you don’t need automated help. That’s where Baxter came in and Sawyer is ready to fill in the blank spots.

“For the research and education market, Baxter has been an invaluable tool for hundreds of universities and research labs around the world. With Sawyer, we offer the research community a similar ROS based interface so they can take advantage of some of Sawyer’s high-performance specifications.  These include a 4kg payload, 1260 mm reach, high resolution embedded vision and sub-millimeter precision, while weighing only 19kg.  Sawyer’s arm is also aluminum, which offers a higher degree of ingress protection than Baxter, allowing researchers to use the robot in more industrial environments,” Brian Benoit, Senior Product Manager at Rethink Robotics, told ZME Science.

These extremely light robots can be programmed to perform a task in a matter of minutes. Operators don’t need to write a line of code. Instead, they just program the robot like they would a new hire: instruct by doing. For instance, to teach Sawyer how to place a microcontroller on a PCB board, the human operators needs only to take the robots ‘wrist’ and guide it. If needed, Sawyer can be re-deployed to another task, like sorting components. It also has a nifty tablet-like display where eyes and brows mimic human emotions, making Sawyer far less awkward in the workplace, Rethink Robotics says.

Central to its ‘learn on the fly ability’ is the open source Robot Operating System (ROS) and software development kit (SDK). This highly adaptable software is why Sawyer is currently being used by leading universities and research centers to teach students or explore new manufacturing techniques.

“Researchers are using the robot in a variety of ways to help make technological advancements that will assist humans, not replace them. For example, Carnegie Melon University has been using our Baxter robot in research that helps visually impaired individuals navigate urban environments,” Benoit said.

“Our primary goal at Rethink Robotics is to help manufacturers solve real world business problems, such as worker shortages, inflexible production lines, and expensive automation options. That continues to be our focus, but we understand that manufacturers are not the only people who can leverage our smart, collaborative robots to solve problems. By providing an open-source SDK for Baxter and Sawyer to the research and education market, we’re allowing some of the world’s brightest minds to use this technology to solve problems in alternative industries and markets,” he added.

Sawyer costs $29,000, a bit more expensive than Baxter, but still very accessible for most businesses. At this point, some might wonder: is Sawyer a replacement for human workers or a jack-of-all-trades which humans in a plant can always rely on for help? Rethink Robotics insists that Baxter and Sawyer augment the workplace and are not meant to replace humans. They even have a collaborative robot angle going on. This is only true if the automated task that Sawyer handles frees up human workers to do more interesting jobs — if those jobs up the chain don’t exist, you’re out of luck.

For now, though, Baxter and Sawyer don’t seem at all threatening (just look at those sweet deer-in-the-headlights eyes).

“We envision a family of smart, collaborative robots that will continue to create new opportunities and fill more gaps for manufacturers,” Benoit said. 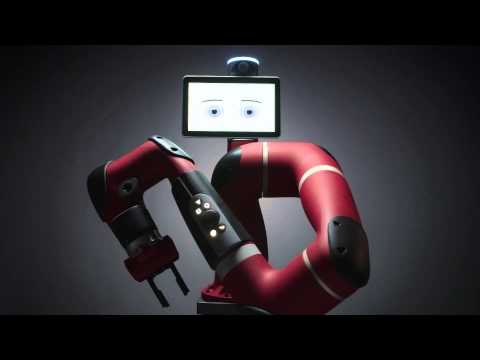