We're at the peak of allergy season.

Nothing reminds you that spring is here quite like the sight of blossoming plants, the warming weather, and the nasty allergies. This week, pollen counts have increased across the US, which may mean that about 50 million Americans will suffer from some combination of a runny nose, watery, itchy eyes, and sneezing as their allergy symptoms ramp up. 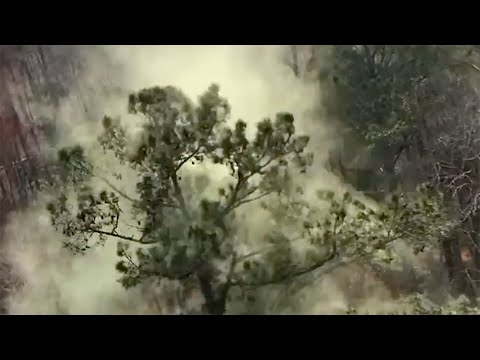 Pollen season typically lasts from early to late spring. Pollen is a fine powdery substance, typically yellow, consisting of microscopic grains discharged from plants, trees, and grass. Being extremely lightweight, pollen is easily swept away by the wind which can transport the irritating substance miles away from its source.

While pollen is not actually sperm per se, pollen grains contain cells necessary to transfer the male half of the plant’s DNA to a compatible plant’s female counterparts (like the pistil and female cones). So, in a way, you could say that pollen is plant sperm powder.

In some parts of the US, such as the Midwest and Northeast, the amount of pollen discharged by plants was so great that the sky became covered in a yellow haze.

A photographer used a drone to capture aerial images of a pollen cloud hovering over Durham, North Carolina https://t.co/U3jbk07sGg pic.twitter.com/76kZWHR7le

To get an idea of how much pollen trees can produce at the height of allergy season, watch this viral video showing what happens when a backhoe nudges a pine tree.

When my husband said the pollen’s bad, I probably should’ve taken his word for it. Crazy!

Something similar was caught on camera this week when a falling tree in Hixson, Tennessee, sent billions of pollen particles flying into the air.

If you have allergies look away! You might just sneeze from watching this video.

Take a look at the pollen cloud this tree created in Hixson ,Tennessee. pic.twitter.com/5Wy4iyz6Vp

During the thick of pollen season, doctors recommend people who are vulnerable to allergies to avoid being outside in the first half of the morning and later in the afternoon. After being outside, people with pollen allergies should shower and wash their hair and clothes. Over-the-counter medications like nasal sprays, antihistamines, and eye drops can also offer some relief.