Perfectly preserved parasitic wasps were found inside their unlucky hosts

New powerful scanning technology has made this find possible.

When it comes to fossils, there may be more than meets the eye. Researchers from the Karlsruhe Institute of Technology (KIT) have developed powerful scanning technology that allows them to peek below the surface. They scanned 1, 500 fossilized fly pupae from between 66 million and 23 million years ago in France and found whole wasps inside of them; the first proof that wasps parasitized the insides of other organisms.

Many wasps are parasitoids in that they lay their eggs on or in a host and the growing wasps take resources from the host, eventually killing it. One type of parasitoidism is endoparasitism, or that the wasp develops inside of the host. It sounds like one of the worst fates to befall an unsuspecting butterfly or fly larva; they go about their daily life until one day their insides are swarming with larvae or a fully grown insect bursts from it. The life cycle continue with the wasp mating and later laying its eggs within another larva or egg. Endoparasitism can be hard to identify, because well, the hosts could look like any healthy creature while the parasite grows within. This type of relationship has clearly been going on for a long time; these fossils are the first concrete proof of endoparasitism. 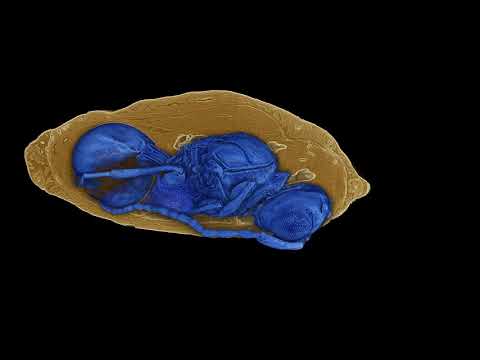 A team of researchers led by Thomas van de Kamp developed a powerful tool to look below the surface of solid objects. They created a scanning method called high-throughput synchrotron X-ray microtomography. A synchrotron is a type of particle accelerator that delivers X-rays over a much wider spectrum and with higher intensity to scan the cross-sections of solid objects. The method is apt for processing many samples quickly and accordingly, the 1,510 samples for this project were processed in just one week.

The 1,510 mineralized fly pupae were taken from the Natural History Museum of Basel and the Swedish Museum of Natural History and scanned. Fifty-five of these pupae were parasitized. In all of these cases, the wasp was almost at an adult stage and about to leave the host. The absence of any younger wasp stage suggests that these stages had only soft tissue that did not fossilize.

The wasps were able to be reconstructed in such detail that they were actually identified as four new species: Xenomorphia resurrecta, Xenomorphia handschini, Coptera anka, and Palaeortona quercyensis. The two Xenomorphia species- yes, named after the being from the science fiction film “Alien”, which was also an endoparasite- shared many similarities and were most readily distinguished by the shape of their waists. The two other species differed by the number of exoskeletal expansions that they had, which could mean that they lived more on the ground.

These fossilized larvae might not have looked like anything special from the outside but what was hidden within has shed light on ancient parasitism.