Dogs and capuchins judge you as ‘good’ or ‘bad’, hint at the birth of human morality

Something as simple as opening a jar goes a long way with anyone. Even other species.

by Alexandru Micu
in Animals, Mind & Brain, News
A A
Share on FacebookShare on TwitterSubmit to Reddit

Humans aren’t the only species who appreciate kindness, a new study shows. Pet dogs and capuchin monkeys have been shown preference for people that help others, pointing to a possible origin of our sense of morality.

Personal preference certainly plays a hand but for the most part, humans share an instinctive understanding of right and wrong — a certain innate morality that goes beyond upbringing. Previous studies have shown that children as young as three-months-old can recognize ‘bad’ behavior and have pretty complex responses to it.

But where does this infant morality spring forth from? To find out, Kyoto University comparative psychologist James Anderson and his colleagues tested if other species exhibit this sense of right and wrong. Their tests on dogs and capuchin monkeys show that these species make similar social evaluations.

There’s something fishy about you

The team first tested capuchins in two settings — first to see if they show any preference for ‘good’ people, and then to gauge their attitude to perceived fairness.

The monkeys watched an actor trying to open a container with a toy inside and seemingly fail. He would then present the container to a second actor, who would either help or refuse him. After the show, both actors offered food to the capuchins who had to decide on which one to accept.

If the second actor helped with the container or returned the balls, the monkeys didn’t show any preference between the offers of food. However, if he refused to help or didn’t hand over the balls, they showed a preference for the first actor, accepting food from him more often.

The next step was to test if dogs responded more positively to people who helped their owner than to those who refused to do so. Each owner was given a container that he would struggle to open and present to one of two actors. This actor would either help or deny the owner’s request. The second actor remained passive. Both then offered the dog a reward that it had to choose from.

Like the capuchins, dogs didn’t show any preference if the actor helped the owner. If he refused to help, the dogs were more likely to take the second actor’s treat. 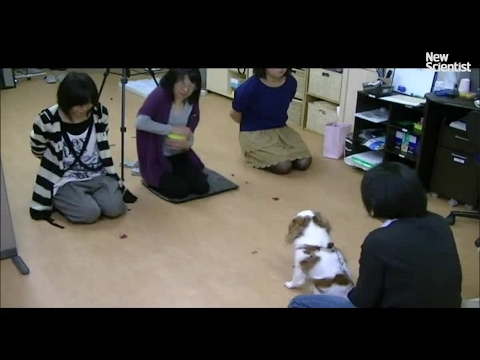 There’s something fishy about you

Anderson considers the results as proof that capuchins and dogs make social estimations somewhat similar to those of infants. It’s not necessarily a conscious reaction, but an emotional one.

“If somebody is behaving antisocially, they probably end up with some sort of emotional reaction to it,” he says.

And if capuchins they can pick up on clues in human interaction, it’s almost certain that they can do so with other primates. It’s likely that they rely on this moral code to decide which members of the group are reliable and which are likely to rip them off. Dogs, on the other hand, have a long history shared with humans and have evolved to be very perceptive of human behavior, be it with a dog or another human. In both cases, this capacity to estimate other group members’ worth would help cement social systems by excluding bad cooperation partners.

So it’s not that capuchins or dogs have a burning desire to set the world on a path to righteousness — rather, it’s about trust and reputation:’This monkey won’t return my stuff, so I won’t share my stuff with it.’ ‘This human won’t help mine open his stuff. That’s not something a good member of the pack does, so I’ll be wary of him until I know what he’s about.’

It’s an important skill to have in a situation where cooperating is the only way to survive. On the one hand, it guards individuals from raw deals. On the other, recognizing when you’re doing something ‘bad’ is vital if you are to remain in the group.

It’s possible that our inbuilt sense of morality is rooted in these early social evaluation mechanism.

“I think that in humans there may be this basic sensitivity towards antisocial behaviour in others. Then through growing up, inculturation and teaching, it develops into a full-blown sense of morality,” says Anderson.

The full paper “Third-party social evaluations of humans by monkeys and dogs” has been published online in the journal Neuroscience and Behavioral Reviews.