A teenager from Quebec might have discovered a hidden Maya city simply by looking at the stars.

A teenager from Quebec might have discovered a hidden Maya city simply by looking at the stars. The finding, which received accolades from NASA, the Canadian Space Agency and the Japanese Space Agency will be submitted to a scientific paper. 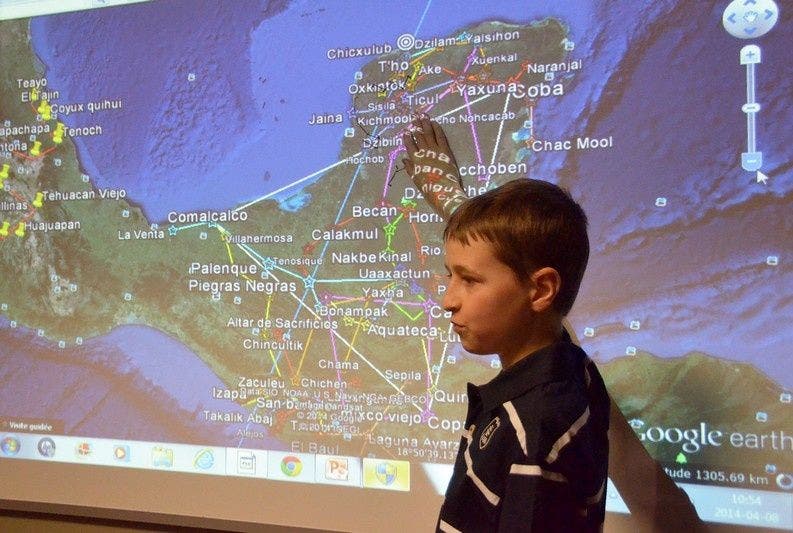 It’s the kind of story everyone wants to talk about. Passionate about the Mayan civilization, William Gadoury, 15, used Geographic Information System (GIS) to interpret satellite imagery, finding that the shape of 22 constellations corresponds with the position of 117 Mayan cities. But he moved even further, studying an extra, 23rd constellation. This constellation connected three stars, but only two cities were discovered. If the pattern is respected, then the third city must also exist, and he calculated its position. He named this lost city K’àak’ Chi’ or “fire mouth.”

“I did not understand why the Maya built their cities away from rivers, on marginal lands and in the mountains,” said Gadoury. “They had to have another reason, and as they worshiped the stars, the idea came to me to verify my hypothesis. I was really surprised and excited when I realized that the most brilliant stars of the constellations matched the largest Maya cities.”

For now, no expedition was planned to find this city due to financial constraints.

“It’s always about money. An expedition costs horribly expensive,” said Dr. Armand LaRocque, of the University of New Brunswick. But archaeologists have promised William to bring him to their excavations.

This thrilled the young man, who has been working on this project for three years already.

“It would be the culmination of my three years of work and the dream of my life,” he said.

What Gadoury did is amazing, and showing such a big interest at such a young age, he may have a golden career ahead of him. This is an amazing accomplishment which should in no way be under-emphasized, but let’s try to avoid jumping on the hype train for now. There are a few things worth considering about this discovery.

First of all, the method isn’t the most scientific one. If you pick a constellation and try to see cities aligned on its pattern, you first need to establish a scale, something which the Mayans would have had trouble with. Also, the topography might not have been on their side, and measuring distances was never going to be easy. Secondly, Mayans had many cities, and for every city that follows the pattern, there are several others which don’t, even bigger and more important cities. If the density of settlements is large enough, you can find many patterns in it.

Then, there are hundreds or even thousands of settlements not yet found, or not yet confirmed. The vegetation grew and covered countless archaeological sites, and archaeologists themselves have limited resources to explore and attempt to find new ones. This site is in the central Belize, not far from the coast. This is a populated area, and it’s highly doubtful that no one has ever seen a big site there. There’s a good chance a little site might be there, but it’s likely not going to be massive and it’s not going to force us to rewrite the history books.

Furthermore, not all identified sites are in public or easily accessible databases. This site may actually not be a new one, it may simply not be in a database that Gadoury had access to – it’s still too early to call it.

The bottom line is, this teenager did something spectacular. He demonstrated remarkable creativity, work ethic and intelligence and may have discovered a Maya site. We should praise him for his discovery and we should attempt to verify the validity of his claims, let’s just not blow everything out of proportions and present the science as it is, ok? His theory about constellations and cities is still a pretty wild one, and finding cities in densely populated areas is not unheard of. Whether or not this is something new and something spectacular remains to be seen.