by Mihai Andrei
in Oceanography, Remote sensing
Reading Time: 4 mins read
A A
Share on FacebookShare on TwitterSubmit to Reddit

NASA has, for the first time, released a global map of ocean salinity. The first thing that popped up for me was the pulse of freshwater gushing from the Amazon, but other major features are worth noticing. 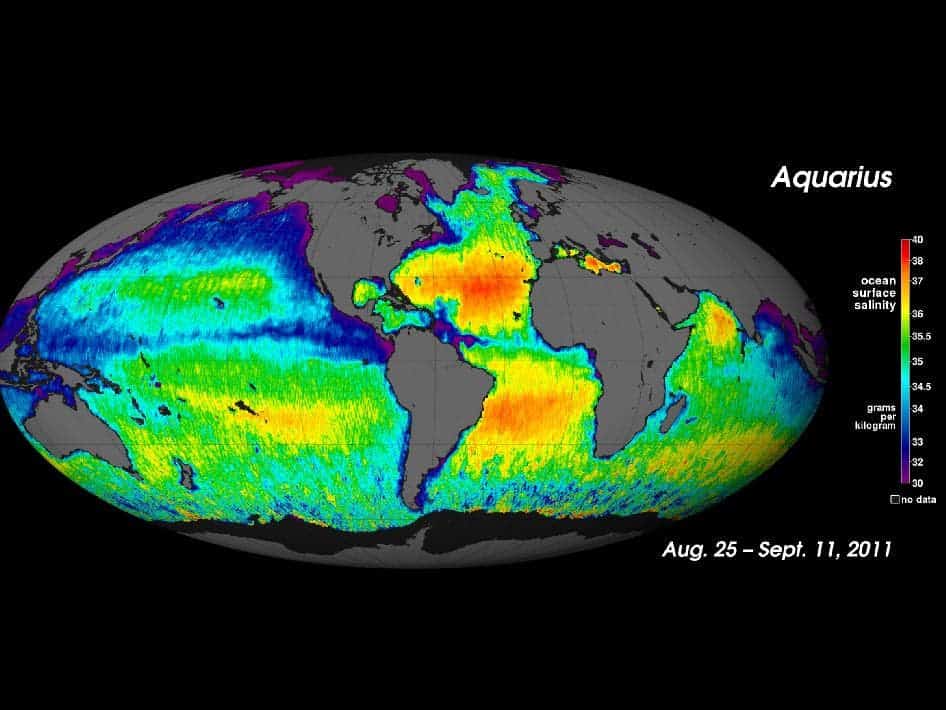 An invisible seam divides the salty Arabian Sea from the fresher waters of the Bay of Bengal and a large patch of freshwater appears in the eastern tropical Pacific in the winter. These and others in ocean salinity levels were revealed by the first full year of surface salinity data captured by NASA’s Aquarius instrument.

“With a bit more than a year of data, we are seeing some surprising patterns, especially in the tropics,” said Aquarius Principal Investigator Gary Lagerloef, of Earth & Space Research in Seattle. “We see features evolve rapidly over time.”

Launched in 2011, aboard the Argentine spacecraft Aquarius/Satélite de Aplicaciones Científicas (SAC)-D, Aquarius is NASA’s first satellite instrument built with the specific purpose of studying the salinity of surface waters. Salinity variations are one of the main drivers of oceanic water circulation, closely connected with the cycling of freshwater, and studying them could provide valuable information (among others) on how the changing global climate is altering global rainfall patterns.

Initially, researchers want to analyze the major features. The Arabian Sea, nestled up against the dry Middle East, is much saltier than the neighboring Bay of Bengal which is showered by the Gange and other major rivers. Also, it’s no surprise that the Amazon pumps a huge quantity of sweet water. Also, another thing that is really nice to see is the large patch of highly saline water across the North Atlantic. This area, the saltiest anywhere in the open ocean is (with a bit of a stretch) the analogous of a desert on land – with little rainfall and lots of evaporation.

“My conclusion after five weeks out at sea and analyzing five weekly maps of salinity from Aquarius while we were there was that indeed, the patterns of salinity variation seen from Aquarius and by the ship were similar,” said Eric Lindstrom, NASA’s physical oceanography program scientist, of NASA Headquarters, Washington, and a participant of the SPURS research cruise.

But this is just the beginning – and as time passes on, researchers will want to look into more details regarding this.

“The Aquarius prime mission is scheduled to run for three years but there is no reason to think that the instrument could not be able to provide valuable data for much longer than that,” said Gene Carl Feldman, Aquarius project manager at NASA’s Goddard Space Flight Center in Greenbelt, Md. “The instrument has been performing flawlessly and our colleagues in Argentina are doing a fantastic job running the spacecraft, providing us a nice, stable ride.”

The next immediate objective is to fine-tune the readings and retrieve data closer to the coasts and the poles. The sensors detect the microwave emissivity of the top 1 to 2 centimeters – a property that depends on temperature and salinity. The thing is, land and ice emit very bright microwave emissions that swamp the signal read by the satellite. This especially adds complications at the poles, where cold polar waters require very large changes in their salt concentration to modify their microwave signal. Still, the Aquarius team was surprised to see just how good the instrument is already able to collect and analyze measurements.

“The fact that we’re getting areas, particularly around islands in the Pacific, that are not obviously badly contaminated is pretty remarkable. It says that our ability to screen out land contamination seems to be working quite well,” Feldman said.

The ultimate goal of the project however is to mix the data with that from its European counterpart, the Soil Moisture and Ocean Salinity satellite (SMOS) to produce more accurate and finer maps of ocean salinity.

“The first year of the Aquarius mission has mostly been about understanding how the instruments and algorithms are performing,” Feldman said. “Now that we have overcome the major hurdles, we can really begin to focus on understanding what the data are telling us about how the ocean works, how it affects weather and climate, and what new insights we can gain by having these remarkable salinity measurements.”