The message is clear: We need to act now!

by Tibi Puiu
in Climate, News
Reading Time: 4 mins read
A A

The world’s wetlands are getting wetter and dry areas are growing drier due to human water management, climate change, and natural cycles. This is the conclusion of a new study, first to combine NASA satellite observations with data on human activity, mapping the two together.

Researchers led by Matt Rodell of NASA’s Goddard Space Flight Center in Greenbelt, Maryland, analyzed 14 years worth of data gathered by the Gravity Recovery and Climate Experiment (GRACE) spacecraft mission, whose primary objective is tracking global trends in freshwater in 34 regions around the world. GRACE consists of twin satellites that, since 2002, have been measuring the distance between themselves in order to detect changes in Earth’s gravity field caused by movements of mass below. Using this method, GRACE tracked variations in terrestrial water movements until the mission ended in October 2017.

In order to understand freshwater movement trends on a global level, the team also employed other datasets, like the Global Precipitation Climatology Project and Geological Survey Landsat.

“This is the first time that we’ve used observations from multiple satellites in a thorough assessment of how freshwater availability is changing, everywhere on Earth,” said Rodell in a statement. “A key goal was to distinguish shifts in terrestrial water storage caused by natural variability – wet periods and dry periods associated with El Niño and La Niña, for example – from trends related to climate change or human impacts, like pumping groundwater out of an aquifer faster than it is replenished.” 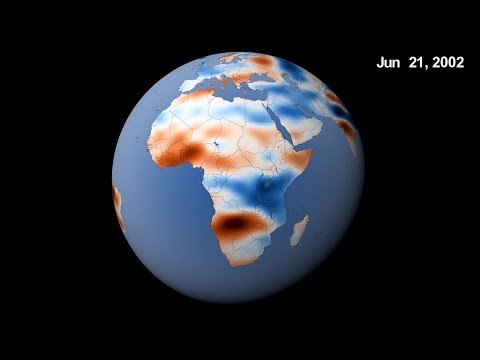 According to the authors, we are witnessing major hydrologic change around the world. Trends suggest that wetland areas are getting wetter while dry areas, typically found between the tropics and high latitudes, are getting drier due to groundwater depletion.

In some regions, water loss is clearly driven by climate change, for example, the Arctic due to ice sheets melting or in mountain areas due to alpine glacier melt. More time and data will have to be required, however, in order to determine the driving forces behind other patterns of freshwater change.

Freshwater loss from ice sheets raises sea levels, threatening coastlines and small islands around the world. On land, losing freshwater can have severe repercussions both for wildlife and human communities. For instance, Southwestern California lost 4 gigatons of freshwater per year from 2007 to 2015, during the worst drought in 1,200 years.

“We know for sure that some of these impacts are caused by climate change,” said Rodell, chief of the Hydrological Sciences Laboratory at NASA. “We are using huge parts of the [Earth’s] available water.”

However, there were also areas that experienced an increase in freshwater circulation, such as the Okavango Delta region in southern Africa, which saw improvements from increased rainfall, or Saudi Arabia, which ended a wheat farming program in 2015, leading to an increase in available water.

Elsewhere, assessing freshwater flow proved more complicated. Take, for instance, Xinjiang province in northwestern China. The province, which is about the size of Kansas, is bordered by Kazakhstan to the west, the Taklamakan desert to the south, and encompasses the central portion of the Tien Shan Mountains. Xinjiang lost 5.5 gigatons of terrestrial water storage per year but the initial assumption — that less rainfall was to blame — didn’t hold water. Instead, the researchers found that a combination of an increase in water consumption for crop irrigation and evaporation of river water from the desert floor was a more likely explanation for the observed patterns.

The biggest takeaway from the study, however, is the huge footprint humans are leaving on global freshwater circulation due to our massive engineering infrastructures. The new map compiled by NASA documents the consequences of the filling of major reservoirs, like the one bound by the massive Three Gorges Dam in China, of the diverted rivers in India, and of the exploitation of the High Plains aquifer in the central United States for agriculture.

Water is the world’s most precious resource, and we need to treat it with more respect if we’re to live in peace and prosperity on this planet. The message is clear: we need to act now.

The GRACE mission will continue once GRACE Follow-On launches on May 19 from Vandenberg Air Force Base in California.