NASA maps 93% of all near-Earth asteroids. In other news, Dinosaurs wish they had science.

Armageddon can wait, NASA‘s in charge for a little while longer. The space agency recently released to the general public a report which censuses more than 93% of the total number of asteroids in the vicinity of Earth’s orbit, meaning they’re all tagged and tracked – risk of undetected collision to a minimum. That’s not all either, it seems the number of near-Earth asteroids is a lot smaller than previously thought. 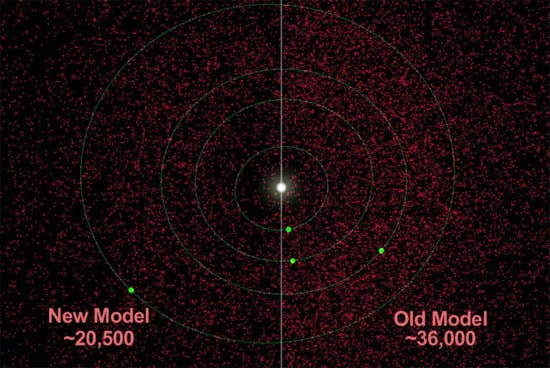 The data on the astereoids was gathered by NASA’s Wide-field Infared Survey Explorer (WISE), a satellite which had completed its mission with all instruments intact and quite a bit of fuel. Instead of scrapping it, the probe was put to extremely good use and repurposed for the mission of tracking down every space rock, big or small, in the vicinity of Earth’s orbit around the sun.

The study, re-named NEOWISE, studies space rocks for two years, time in which it surveyed over 100 thousand objects in the prime location between Mars and Jupiter alone  — the so-called Jupiter Belt. NASA informs that NEOWISE has found far fewer celestial bodies in the vecinity of Earth’s bodies than previous Earth observations had led scientists to believe. As such, the probe logged 19,500 mid-sized (between 300 and 3,300 feet wide) near-Earth asteroids instead of the previous estimate of 35,000.

Regarding larger, apocalyptic asteroids (more than 6 miles in diameter, the kind that killed off the dinosaurs)  the probe mapped tracked down 981, fewer than the initial 1000 estimated, of which 911 have been mapped in the sky. In all, 93% of the near-Earth asteroids have been now mapped.

“NEOWISE allowed us to take a look at a more representative slice of the near-Earth asteroid numbers and make better estimates about the whole population,” said Amy Mainzer, lead author of the new study and principal investigator for the NEOWISE project at NASA’s Jet Propulsion Laboratory in Pasadena, Calif. “It’s like a population census, where you poll a small group of people to draw conclusions about the entire country” . . . It is believed that all near-Earth asteroids approximately 6 miles (10 kilometers) across, as big as the one thought to have wiped out the dinosaurs, have been found.

“The risk of a really large asteroid impacting the Earth before we could find and warn of it has been substantially reduced,” said Tim Spahr, the director of the Minor Planet Center at the Harvard Smithsonian Center for Astrophysics in Cambridge, Mass.