by Tibi Puiu
in Space, Technology
Reading Time: 3 mins read
A A
Share on FacebookShare on TwitterSubmit to Reddit 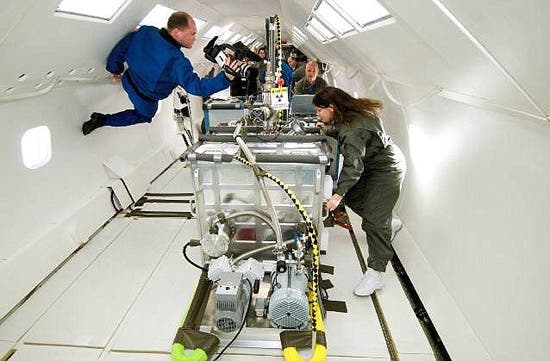 The 3D printing revolution is right around the corner. While we might still be a few years away from seeing such printers for home users at an affordable price, the technology has so far proven itself marvelously, whether we’re talking about jawbone implants, scale on scale mechanized dinosaur parts or extremely fine nanoscale objects. Yes, 3D printing has shown that its a versatile tool in various environments, and its just waiting to cross the frontier – to space. NASA is particularly interested in this type of technology, and recent tests in parabolic flight are promising.

At the dawn of the new millennium, NASA dabbled with 3D printing for a while, and engineers came up with the Electron Beam Freeform Fabrication (EFB3) – a special kind of 3D printer. Its working principle is similar to other models, only this is meant for heavy duty, special operating conditions and certain raw materials. As anything destined for aerospace, special is a keyword.

The EFB3 uses an electron beam gun, dual wire feed, and computer controls to compose metal elements from “feedstock”, or raw materials to you and me. You see, raw materials are easier to store, and in space… well, space is an issue. Its main advantage comes into play when custom work is concerned. Say astronauts need a new part to replace an old one that has malfunctioned or is susceptible to a malfunction. The cost of bringing a new one on the next cargo ship is astronomical. Pun aside, in deep space missions a re-stock would definitely be out of the question. With this machine, however, you just need to input the CAD design, place the feedstock and collect.

Like I said NASA has been working on this device for a while now, but in recent years it has preffered to partner with private establishments. Thanks to  Made in Space, Inc., NASA has been able to turn the EFB3 completely space friendly, as in small dimensions and microgravity operation. The team has been working on testing the units in parabolic flights where weightlessness occurs for short periods – the next step would be testing the equipment on the International Space Station.

‘This is exactly the kind of technology we want to capitalize on,’ remarked NASA’s Deputy Administrator, Lori Garver.  ‘We want to push the technology boundary, not only with improvements of our own systems, but it is our job to also see that growth in the private sector.’