by Tibi Puiu
in Nanotechnology, Technology
Reading Time: 2 mins read
A A

A team of researchers at Vienna University of Technology constructed various nanoscale models of incredible precision (St. Stephen’s Cathedral, London’s Tower Bridge or a F1 race car), using a technique called two-photon lithography. The device which the researchers used for their high precision 3D printing is an order of magnitude faster than others such similar, and opens a new set of applications, most predominantly medicine.

To create their fine structures, such as this F1 model race car captioned on the right, a liquid resin was used in the 3D printing process. A focused laser beam, guided by a set of movable mirrors, hardens the resin precisely where it needed to be. This isn’t any ordinary resin, however – chemists, also involved in the project, developed a special resin containing molecules, which when activated by the focused laser beam,  induce a chain reaction in other components of the resin, so-called monomers, and turn them into a solid. This activation occurs only when the trigger molecules absorb two photons of the laser beam at once, hence the two-photon lithography technique. Other 3D printed structures of similar nanoscale had been created before by other researchers, however these required a long time to complete.

“Until now, this technique used to be quite slow”, says Professor Jürgen Stampfl from the Institute of Materials Science and Technology at the TU Vienna. “The printing speed used to be measured in millimeters per second – our device can do five meters in one second.” In two-photon lithography, this is a world record.

Conventional 3D-printing processes require preparation of the previously created layer before another can be applied on top of it, and thus ultimately lead to the creation of a solid body. The liquid resin used by the Austrian researchers allows for a constant working surface, free of having to prepare it beforehand, greatly speeding the operation. The greatest optimization, however, was that of improving the mirrors’ control mechanism, precisely tuning their acceleration and deceleration periods.

Currently, 3D-printing is emerging as an industry shaping technology, due to its wide array of applications, from biomedicine, to fine mechanical tiny parts, to paleontology.  The TU Vienna recent research will most likely provide a big leap forward by offering a printing speed unrivaled so far, which can be scaled to larger structures as well.

The real-time video below demonstrates how the 3D printer made this 100 layer, nanostructure in just four minutes. 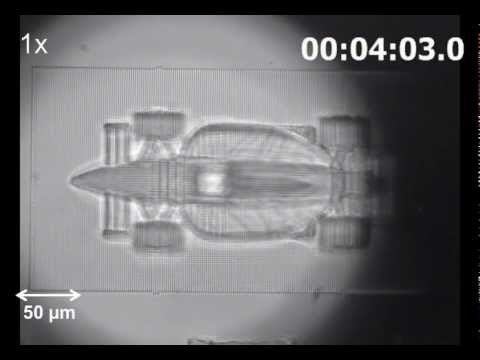