by Tibi Puiu
in Research, Science, Technology
Reading Time: 3 mins read
A A
Share on FacebookShare on TwitterSubmit to Reddit

Scientists at  Drexel University in Philadelphia, Pennsylvania have set on a path that promises to revolutionize the way paleontology is studied, and model reconstructions are made from fossils. By using 3D printers, the researchers intend on cheaply and efficiently replicate bones, without going through the hassle of casting with plaster molds. This way, they can actually build very faithful scale models of dinosaurs, mechanize them, effectively turning them into robots, and thus study how long-extinct animals moved and behaved.

“Technology in paleontology hasn’t changed in about 150 years,” said Drexel paleontologist Dr. Kenneth Lacovara, an associate professor in the College of Arts and Sciences. “We use shovels and pickaxes and burlap and plaster. It hasn’t changed — until right now.”

With this in mind, Lacovara has taken to himself to create  3-D scans of giant dinosaur bones and other fossils in his lab. These 3-D scans are extremely valuable alone, not just printed – they can be manipulated, thoroughly studied and modeled through further computer analysis. To turn them to the physical realm, Lacovara listed mechanical engineer Dr. James Tangorra, an assistant professor in Drexel’s College of Engineering, to handle the effective 3-D printing part.

The rapidly evolving technology of 3-D printing has seen a lot of advancements in the past few years, and more and more fields of applications, especially, engineering have aknowledged the valuable contribution and usefulness it can bring. Just last week we reported on the extraordinary story of a woman who had her entire lower jaw replaced by an exact titanium replica, which was built using a 3-D printer.

“It’s kind of like Star Trek technology, where you can press a button and the object pops out,” Lacovara said. A six-inch model of a dinosaur bone can be printed in a few hours using current technology. 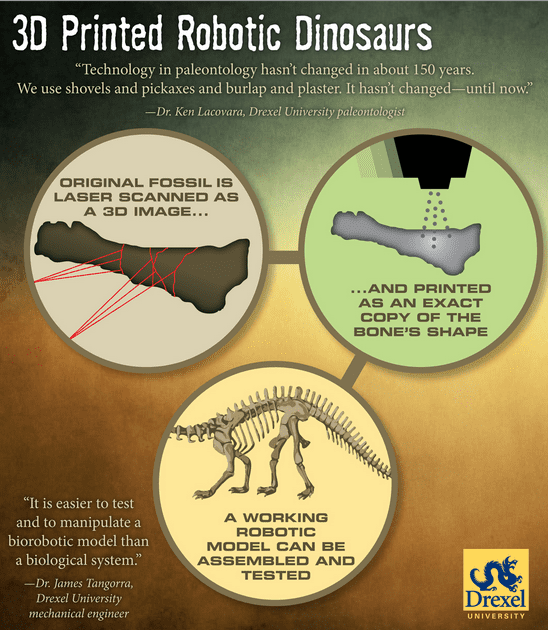 This technology will help Lacavora with his plans to create replicate dinosaur skeletons for museums without the costly and complex process of using casts, but more importantly, it will help him, and other scientists soon to follow hopefully, build exact, scale models of extinct species. When you’re studying sauropods the size of a stadium and weighing tens of tons, it’s extremely difficult to emit pertinent hypotheses concerning their movement mechanics or behavior, and building cast robots of their natural size sounds extremely dangerous. Actually, in this respect, palentology is nothing more than guesswork – once with the implementation of mechanized scale models of dinosaurs, for instance, this might change.

“We don’t know a lot about the way dinosaurs move,” Lacovara said. “How did they stand? How did they ambulate? Did they run or trot? How did they reproduce? It’s all a bit mysterious,” especially when it comes to the largest dinosaurs.

Lacovara predicts that they will have a working robotic dinosaur limb constructed by the end of 2012. A complete robotic dinosaur replica will take one to two years to create. Check out a sample of Lacovara and his team’s first 3-D reconstruction, an ancient New Jersey crocodile, in the video below.

DIGITAL PALEOART: Reconstruction and Restoration from Laser-Scanned Fossils from Evan Boucher on Vimeo.