by Tibi Puiu
in Animals, Robotics, Science
A A

New Jersey will soon be home to the closest thing to Jurassic Park so far, after yesterday the only press release in the world to feature dinosaurs announced that  Field Station: Dinosaurs, an new kind of innovative theme park which opens in Secaucus in May 2012. With the guidance of paleontologists from the New Jersey State Museum, the exhibit will feature robotic and human-controlled dinosaurs that mimic everything from walking to hunting, in a surface 20 acres large near the Hackensack River.

Yeah, well if the prospect of vicious cloned dinosaurs frightened you, how about a pack of 31 life-sized, animatronic dinosaurs, all residing in a natural setting? Well, I’ve only had the chance to see one of these so called dinosaurs so far from the video below which first features the Field Station: Dinosaurs founder presenting his concept, before he unveiled a 14-foot T-Red that will be one of the dinosaurs it features. This one was actually controlled by a man, which if you look very closely you can see underneath the “juvenile T-rex” body. 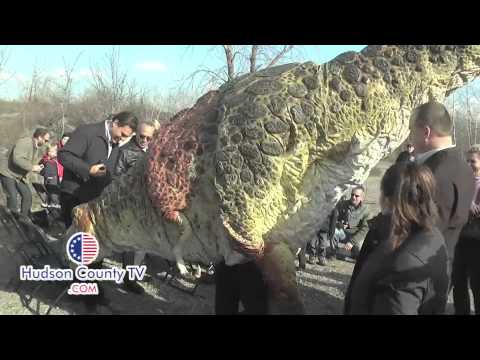